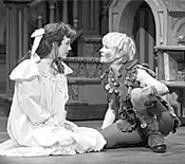 In a way, it makes perfect sense that the role of Peter Pan -- the boy who doesn't want to grow up -- has always been played by an adult. If you ask most boys or girls, what they desperately want is to be older -- it's the grown-ups who, having learned what a fraud adulthood can be, often yearn for the simpler and less complicated days of youth. Then again, no matter how old we get, we still have a good-sized chunk of our kid-selves knocking around inside, which explains, among other things, the continual progression of simulated-fart-sound technologies.

As almost everyone knows, the beloved musical Peter Pan, based on the play by Sir James Barrie, takes the Darling family for an imaginary ride into a fantasy world filled with musical pirates, blissfully non-PC Indians (their one song, titled "Ugg-a-Wugg," is not an approved translation), and a homicidally inclined crocodile with a clock in its belly.

But at the center of the Peter Pan now playing at Playhouse Square is this question: Can a post-menopausal woman, born the year Eisenhower became president, convincingly portray a 12-year-old boy with an obsessive fixation on remaining prepubescent? Ex-Olympic gymnast Cathy Rigby has been playing this role since 1988, when she was a spry 36, but encroaching age has a way of taking the bounce out of anyone's step. Anyone, that is, with the apparent exception of Cathy Rigby.

Merging the rough spirit of Huck Finn with the lithe grace of a highly trained athlete, the diminutive Rigby seems every inch a seventh-grade boy as she wipes her nose with her arm and kicks one of the Darling children out of bed with gusto. Leaping from pillar to post, Rigby animates Peter without becoming too cutesy -- a tendency of many women who play this part. As strong as Rigby's interpretation is when she's acting her scenes, her songs go oddly flat, and some of the magic seeps away. Displaying a vocal thinness not apparent in any other aspect of her performance, Rigby seems to tolerate rather than relish such well-known tunes as "I Gotta Crow" and "Neverland."

But any singing lapses are erased by the sheer physicality of Rigby's presence and her spectacular flying stunts. Yes, the steel cables are visible, so there is never the rush of cinematic illusion that occurs when Harry Potter flies at warp speed over his Quidditch field on the big screen. But that exhilarating sensation is replaced with an even more visceral jolt as Rigby sails across the stage, disappearing for a moment and then tumbling back into view, swooping down to within a foot or so of the stage floor and then soaring up again in a midair pirouette. This hardwired ballet, accompanied by an endless supply of fairy dust and the three airborne Darling children, brings the first act to a close and leaves the audience giggling and chattering like a bunch of caffeine addicts on an espresso buzz.

Of course, there's much more to Peter Pan than just Peter, and this touring production, directed by Glenn Casale, doesn't quite ace the two most important supporting roles. Playing both Mr. Darling and the infamous Captain Hook, Howard McGillin has the towering stature and sharp features that are perfect for these dual roles, along with an awesome set of pipes. But as Hook, McGillin never luxuriates in the comic-book excesses of this iconic swashbuckler. The egotistical song "Hook's Waltz" ("Who's the swiniest swine in the world? Captain Hook!") should be drenched in the pirate's slimy self-regard, yet it seems slightly underplayed by this talented actor.

Erring in another direction, Patrick Richwood trots out every quivering cringe and flinching double take as the much-abused Mr. Smee, Hook's first mate. However, Richwood is so intent on piling one bit of amusing shtick upon another that the sweet character of Smee never has a chance to peek through. In the less showy female roles, Elisa Sagardia is warm and comforting as Wendy Darling, and Lauren Masiello presents a fetching image in her brief tribal costume as Tiger Lily.

In some ways, this production shows the effects of being on the road for quite some time -- let's call it tour-ette's syndrome. Some of the sets seem a bit faded and dowdy, and the backdrop for the pirate-ship sequence is so boring, one is tempted to think it was hung with the wrong side facing out. Also, the battle scene between the Lost Boys and the pirates needs a tightening rehearsal so that it reaches a satisfying climax rather than just, ah, petering out.

Even with these peripheral shortcomings, this Peter Pan will stay in your memory, thanks to the energy and boundlessly boyish verve of Rigby. It's her last swing as Peter, and it's a small gem of a performance.