Costner and Allen are the upside to The Upside of Anger. 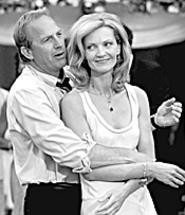 The Upside of Anger belongs to Joan Allen, who plays Terry Wolfmeyer, a wife abandoned by her husband and left to pick up the pieces and collect them in a giant bottle of vodka. Terry's is the cold, composed visage of a woman struggling to keep it together; through her pale, glowing skin you can see her blood simmering, kept from boiling over by the chilled Grey Goose she pours down her throat. Her smiles are forced and phony, belying the fury coiled beneath the surface -- a fact not lost on her four daughters: Hadley (Alicia Witt), the college student about to graduate into accelerated wifedom and motherhood; Emily (Felicity's Keri Russell), a ballet dancer hoping to leap into a professional company; Andy (Erika Christensen), who wants to dodge college for a gig in radio; and Popeye (Evan Rachel Wood), a high school student just discovering the joys of boys and other illicit pleasures.

Terry finds disappointment all around her -- not only in her vanished husband, but also in the girls, whose every choice goes against their mother's wishes and dreams for them. Terry never imagined that bright Hadley would turn out so old-fashioned, and she loathes Emily's desire to pursue a career in dance, believing it an impractical aspiration. When Andy announces that she's taken a job producing drive-time radio -- and taken up with her slovenly, lecherous older boss, played by the movie's writer and director, Mike Binder -- Terry can barely find the words to express her displeasure. She's speechless, her silence more devastating than all the shouting in the world. (She lets her imagination do her bidding, in a rather explosive scene set around the dinner table.) Only Popeye, as the youngest, escapes her mother's blows. She's left alone, locked in her bedroom with a bong and the pretty-boy schoolmate who won't return her affections because, he insists, he's gay.

Into this upper-middle-class, neatly appointed cauldron of fury and despair walks -- or rather, stumbles -- Denny Davies (Kevin Costner), the neighborhood drunk, who goes nowhere without a bottle of Bud and a tightly rolled joint. Denny, a onetime baseball hero, is now a radio host who refuses to talk ball on the air; better to forget the past, he insists more than once, than to relive it for the sake of cheap ratings. If Allen owns The Upside of Anger, she is generous enough to lend it to Costner, who, despite the dim, glazed eyes, is more alive here than he's been in years. Each time he shows up on-screen, the movie plays like a sequel to Bull Durham, Tin Cup, or For Love of the Game -- the latter almost literally, since the only time we see a picture of Denny in uniform, he's sporting Detroit Tigers orange and black -- surely, a still photo taken from the Sam Raimi-directed picture.

Costner plays Denny as if he's known this guy all his life; he wears him like the old shirts he ties around his waist, in a surreptitious effort to hide his expanding gut. Denny, who quickly assumes his spot at the head of the Wolfmeyers' dinner table, is a mess, stubbly and splotchy beneath an unkempt receding hairline. It's the role Costner does best -- the faded star fading away, trying to erase the slow slide into anonymity by drinking and fucking and talking so much that he'll at least feel something, even if it's the numbness of despair. "It must suck for you, not being me," Denny tells Shep, his producer, to which Shep responds, "Almost as much as it sucks being you." Denny and Terry make perfect partners, drinking buddies who make the awkward leap into bed before realizing they feel something after all -- if not love, then perhaps the desperate need to connect to something other than a late-morning cocktail.

Popeye narrates the movie with the proper distance of a younger sibling banished to the margins: "If she wasn't my mother," she announces in the first scene, "I'd slap her." Terry, bitter and sad, but never one to shed a tear, could have been an unsympathetic character -- a caricature of the woman scorned, a beauty now balled into an unrelenting fist. But Allen, who wears nothing more than a nightgown and robe in the earliest scenes, plays Terry with a keen, painful self-awareness. "Be nice," Denny begs of her. "It's not in my nature," she says, her wan grin suggesting she desperately wishes it were.

Binder, whose HBO series The Mind of the Married Man confused glib for deep while passing sneering judgment on its flawed characters, has emerged from that experience with a mature, informed piece of work that sticks in your head, your heart, and your throat long after it's over. Only its ending disappoints; Binder gives his characters a cheap and easy out, which threatens to muck up the works. But the movie is so strong till then that you will forgive him his ending; these characters, who look like movie stars but feel like your next-door neighbors, transcend his flaws as a storyteller trying to make his movie mean something, when all it needs to do is make you feel something.