Raven brings his badass biker blues to the Beachland 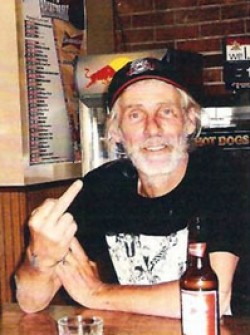 After he finished his damaged-biker Back to Ohio Blues LP in 1975, the man known as Raven gave away most of the few hundred copies that were pressed. The little-heard album was both of its time and timeless. Today, after it's reached a wider audience, mostly via record nerd/hipster word of mouth, it seems to hold an ethereal psychic influence over all the great lo-fi stoner music that's emanated during the past 30 years from Raven's hometown of Columbus, Ohio.

The constant aroma of cheap beer, foul-tasting weed and greasy sex just oozes through the record's grooves, evoking a mood nearly incomparable to any album before or since. In its sneering, barn-blitzed glory, Back to Ohio Blues - at least for the archaeologically minded crud fiends of now - is arguably one of the most authentic punk statements ever. Indeed, few things are more punk rock than Raven's repeated yelps of "You gotta get fucked" and "You gotta get high" during "Raven Mad Jam." Whereas most punks are yelling "Get down" or something lame like that, Raven's screaming "Get fucked" in a feral, brain-damaged manner that can only be described as sublime.

After a three-decade absence from music (during which, among other apocrypha, he was presumed to be dead of a drug overdose), Raven has reemerged for a onetime Hell Night blowout at the Beachland with fellow Cowtown comrades Times New Viking and Mike Rep & the Quotas. Rep, who wrote the liner notes for the Back to Ohio Blues reissue, sees Raven as a classic D.I.Y. character who never had much use for the "Rock 'n' Roll Dream Machine."

"He made the music because it was inside of him and needed to be expressed," writes Rep in the liner notes. "Like a shark has to swim to breathe, Raven has to record his gut-wrenching creations - perhaps exorcising his demons onto wax, one could say."

As so, many of Raven's messed-up eulogies to drugs, death and sleaze were derived straight from his outlaw biker escapades throughout the early '70s. "I was in Florida working for this guy [who] would fly his Learjet to Columbia and bring me the kilos to cut up with my musketry," recalls Raven in a phone interview. "I walked into his place, and there was nothing in the house but brown paper bags full of pot. There must have been one living room, one kitchen, three bedrooms full of dope."

Such folksy yarns would lay the songwriting framework for Back to Ohio Blues, once Raven returned to Columbus in 1974 and hooked up with a band that could musically illustrate his depraved visions. Recorded at the infamous Owl Recording Studio (a space known for housing the one-off efforts of Ohio downer prophets like One St. Stephen in the mid-'70s), Back to Ohio Blues is a mind-searing slab of heavy psycho-blooze abandon that often reaches krautrock/motorik velocity due to its monolithic yet propulsive rhythms. Raven rants in a completely unhinged, spastic snot-spraying delivery, with sinister scuzz-guitar leads that rev like a thousand de-tuned Harleys. Consisting of improvised jams with no overdubs, the record is intensely pure, with an atmosphere akin to eavesdropping on a gathering of Midwestern devil worshippers.

So it came to pass that a record initially pressed in the minuscule quantity of 300 and given away (or forced upon) family members and friends by Raven has gone through more than one vinyl bootleg, dozens of illegal uploads and finally an official CD and vinyl reissue. While some may think Back to Ohio Blues has reached this stature because of the machinations of hoarder-geeks like the folks who recently compiled the brilliantly rendered Acid Archives collectors' guide, when you hear Raven and his new band, you'll know that, as always, it's about the music. music@clevescene.com