The Boston quartet offers up a quirky, brooding take on post-hardcore. 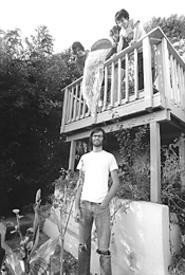 Piebald's music has always been a tough sell. When the quartet emerged from Boston's hardcore scene in the mid-'90s, it was more interested in playing its own quirky melodies than obeying the hardcore conventions of straight-ahead riffing and roaring, guttural vocals. Piebald's crunchy guitar parts possessed the genre's fiery urgency, but also contained a yearning warmth that buoyed frontman Travis Shettel's absurdly strained crooning. Other bands around the country were brewing a similar post-hardcore sound -- Texas Is the Reason, the Promise Ring, and Sunny Day Real Estate all come to mind -- but none of them had such an offbeat style.

Credit Shettel's voice for that. On Piebald's 1995 debut, When Life Hands You Lemons, the singer is terribly off-key at least half of the time. Even die-hard fans have to admit that Shettel has no upper register, and listening to his frequent attempts at hitting the high notes would probably be a grueling experience for many casual pop-punk listeners. So what is it that draws people to Piebald's sound?

"I'd like to think that [our music] is creative and quirky," Shettel offers in a recent phone conversation.

Okay. Maybe that begins to explain it. But there must be something we're overlooking. Just when it seems that Shettel can offer no further explanation for Piebald's abnormal appeal, guitarist Aaron Stewart, who is apparently following the conversation from the background, breaks it down even further.

We point out that Piebald, who used to tour in the type of yellow "short bus" used for transporting handicapped children to school, probably wouldn't be considered very cool by mainstream standards.

Even so, Piebald has struggled for mainstream acceptance. Two of the bands that the group has taken on the road as tourmates over the last several years, New Found Glory and Hot Rod Circuit, have already established larger followings. Surely Piebald must be a bit jealous of the success that keeps eluding them.

"In some ways yes, but in some ways no," he says. "Maybe we're less accessible [than those bands], but we're writing the songs we want to be writing, so we're happy with what we're creating, in the long run."

Though Shettel shrugs off the pressure to succeed, it's clear that it has affected his band. Until recently, Piebald -- rounded out by bassist Andrew Bonner and drummer Luke Garro -- was never a self-supporting gig. Through the first six years of the band's career, Piebald's members adhered to a standard DIY routine: touring when they had breaks from school -- and more recently, from work. Around the summer of 2001, that lifestyle began to take a toll.

"We all had things going on in our lives that were more important than the band," Shettel says. "They were affecting our lives so much that we couldn't do the band either. It lost the fun that it had for a while." But eventually the group realized that "there isn't anything that's more fun than this."

That realization was manifested during the recording of their latest offering, We Are the Only Friends We Have, which the group dropped in early 2002. With the help of producer Paul Kolderie, who has worked with Radiohead, the Pixies, and Hole, Piebald pushed its sound into increasingly poppier terrain, converting hardcore aggression into rock and roll muscle. The transition seems to have taken away some of the combustible math-rock edginess of Piebald's earlier work, but the group also takes risks that pay off nicely, like the garage-rock experimentation of "Rich People Can Breed." The cut starts out as a rock and roll rumba, then switches over to a delicate breakdown that milks the hazy longing of Piebald's signature post-hardcore sound.

But despite the new disc's pop veneer and Shettel's testimony to the group's rediscovered enthusiasm, there's an unusually dark mood running through the album's lyrics. On "Karate Chops for Everyone but Us," Shettel sings, "Nothing seems to hold my interest anymore/Bad ideas come in small doses/We can't wow you with our people skills/We make enemies not friends."

"All of the songs on this new record were written right after the break, when we got back together," Shettel explains. "There wasn't any real dark period in my life, but maybe it was a reflection on all that time off and missing music."

With Friends in the can in late 2001, Piebald started touring incessantly, from the end of that year through much of the next.

"We had a little bit of time off at Christmas, then we just kept touring. All the time," Shettel says. "There was no way for us to get 'real' jobs, but we were supporting ourselves. Maybe tons of money wasn't coming in, but enough to pay the bills, so we were living off it, and it just happened."

Not only was the touring keeping the band afloat, but offers were starting to come in for higher-profile gigs as well. The group took an opening slot with old friends New Found Glory, then planned a European tour for the fall and was tapped by exploding emo icons the Dashboard Confessional to open a string of dates.

But just as Piebald was set to hit the road abroad, Shettel's voice gave out, the result of a hematoma that had formed on his vocal cords. The polyp-like blood blisters were successfully removed by microsurgery, but the band had to cancel the tour and the Dashboard dates.

With all the turmoil behind the band now, Piebald is back in shape and ready for its first headlining tour in almost a year. The group played a string of dates in the South prior to its annual Christmas bash in Andover, Massachusetts, and chances are, the momentum Piebald built throughout 2002 will carry over to this year.

"I would love for more and more people to love our music and get something from it, but I'm not really worried about the future," Shettel says.

"I think it will just kind of unfold," he adds, playing it cool as usual.