The Daily Show's Jon Stewart looks good in the polls. 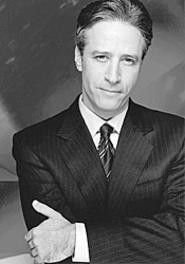 Jon Stewart is the funniest white man in America. It's right there in the pages of Entertainment Weekly, which two weeks ago declared Stewart and the cast of Comedy Central's The Daily Show No. 2 on its list of the continent's 25 funniest people. (Chris Rock was at the top.) "If you look at laughs per square inch, we're really in there," says Stewart, who appears at the State Theatre Friday for a stand-up comedy performance.

In an overcrowded field stuffed with yammering wonks, Stewart's "fake news" show has emerged as a major media player this election year. Its reporting on the presidential campaign, dubbed "Indecision 2004," is the smartest, shrewdest, funniest take on the candidates out there. "We have a pretty good internal barometer of when we suck and when we don't," says the 41-year-old host. "It's good to have focus [during] political season."

The Daily Show's blend of pop-culture sass and political acumen makes for consistently refreshing TV (of John Kerry's recent purchase of a jockstrap while shopping with his daughter and reporters, Stewart opined, "He's got some balls"), and celebs and politicos alike make sure it's on their itineraries. "We're the de facto lighter side of the government story that they all have to do as part of the digestive process of the news cycle," Stewart says.

Among the presidential guests was Dennis Kucinich. "There's a certain feel to him that made you like him and also made you want to just get him a cup of hot chocolate and go, 'Don't worry,'" Stewart says. "But I don't know where the airy-fairy stuff comes from. One too many incense candles, and all of a sudden he's talking about 'We're all part of the same energy river.' That's presidential talk."

After more than a decade in the business, Stewart has clearly found his place. Ten years ago, he was the host of his own, self-titled, doomed talk show on MTV. He landed a recurring role on The Larry Sanders Show (as himself -- albeit a more career-minded, ambitious version of himself). And he penned a best-selling book. In the process, he became a hero to Gen-Xers: a smartass who not only understood them, but was also one of them. In 1999, he took over as host of The Daily Show, which was then more smarm than smart. "This is my niche," says Stewart. "It's a pure form of being able to write jokes about things I care about. Other times in my career, I had to adapt myself to the situation. This is what I'm most interested in and annoyed and passionate about."

"Our place is a lot more selfish than it is proactive, in terms of what it's trying to accomplish," he says. "We're really a bunch of losers entertaining ourselves while yelling at the TV."