Life's a drag for this opera star. 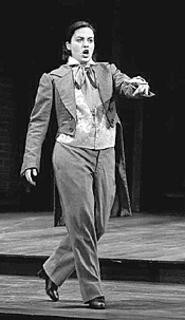 Layna Chianakas has spent all of her time on area theater stages dressed as a man. In Cleveland Opera's production of Faust, being performed this weekend, the new mom from California once again suits up in men's clothing. "My voice type is mezzo-soprano," she explains. "And we tend to sing a lot of trouser roles."

Does all this masculinity ever make Chianakas want to shout, "Man! I Feel Like a Woman!"? "It's just acting," she laughs. "I've honed my craft." Her portrayal of the lovestruck Siebel in Faust joins a long line of male roles she's done for the Cleveland Opera (including The Marriage of Figaro, Julius Caesar, and The Tales of Hoffmann). "It's a fluke that I've only played boys in Cleveland," she says.

The narrative itself sticks pretty close to Goethe's classic tale of a man who sells his soul to the devil. "It's a good-over-evil redemption play," says Chianakas. "It's kind of close to my heart, because it was one of the first arias I sang back in the day." Faust is at the State Theatre (1519 Euclid Avenue) at 8 p.m. Friday and Saturday and 2 p.m. Sunday. Tickets range from $28 to $128, available by calling 216-241-6000. -- Michael Gallucci

There may be a 21st-century Mozart among us, but we'd never know it if it weren't for people like Cleveland State prof Andrew Rindfleisch, who launched the Cleveland Contemporary Players, a free concert series devoted to new music. "We try to present as much variety as possible," he says. "There's never enough new art [in Cleveland]. I'd like there to be a larger public sense about it." The second concert in the series, which debuted last November to a mostly young audience, happens Tuesday. A singer and a group of instrumentalists will perform works by six living or recently deceased composers, some of whom have already secured prominent places in modern music history: Morton Feldman, George Benjamin, and Jeffrey Stadelman, among them. Says Rindfleisch: "Musically, it's as different as we can make it." Show time is at 8 p.m. at CSU's Drinko Recital Hall, 2001 Euclid Avenue; call 216-687-5100. -- Zachary Lewis

Rare Blend founder Vic Samalot says he's spent a dozen years test-driving a brand of progressive rock that's "still alive and kickin'. We just need to keep the momentum rolling along." Since 1993, he has partnered with keyboardist Bobbi Holt to experiment with a rainbow of rhythms, from Spain and the Middle East to tribal Africa. The upshot has been a collision of rock, jazz, fusion, and world music over three CDs. "Labor of love, work in progress -- whatever you want to call it," says Samalot. "Our longevity is just a plain old we-dig-what-we're-doin' mind set." Rare Blend performs at 9 p.m. Friday at Wilbert's Food & Music, 812 Huron Road. Tickets are $7; call 216-902-4663. -- Cris Glaser

Rory Block kicks off her latest CD, From the Dust, by exclaiming, "Everybody is asking me why I sing the blues!" Don't expect many answers from listening to the mostly original set, which features the cheery-sounding Manhattan-bred Block singing and playing her guitar, sans band and overdubs. She's at the Winchester Tavern (12112 Madison Avenue in Lakewood) at 9 p.m. Thursday. Tickets are $15; call 216-226-5681. -- Michael Gallucci