An Italian film director gets randy in Cain Park's Nine. 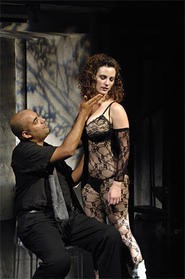 It is commonly accepted that our world consists of boys and girls, men and women. But for aeons, women have argued that there really are no such things as "men." Only boys who grow old, but not up.

This sweet tension between men and women is at the crux of the salacious musical Nine, now at Cain Park. Based on Federico Fellini 's autobiographical film 8 1/2, this work explores the creative mind and unchained libido of film director Guido Contini, a married man who doesn't let his wife cramp his style with the ladies.

And oh, are there ladies! Right from the start, the stage is filled with more than a dozen of Guido's conquests (and his deceased mother, of course). With Guido leading them through their paces like a concertmaster, these women represent his obsession with sexual calisthenics. Jumping back and forth in time, we observe nine-year-old Guido's encounter with his first hooker, as well as the 40-year-old version's interactions with his mistress, his muse, and other assorted females. Stuck for his next movie idea -- a western? a Bible epic? -- Guido decides to vacation at a spa and rest his weary, um, mind.

All this is tied together, to some degree, by Arthur Kopit's punchy but surprisingly slim book. However, the undeniable star of this show is the music composed by Maury Yeston. Ranging from tender ballads to a mini-operetta, the offerings are dazzlingly eclectic and constantly involving. Regrettably, Yeston's lyrics often don't keep pace and can be agonizingly banal, as in Luisa's defensive ditty "My Husband Makes Movies" ("Some men buy stocks/Some men punch clocks/Some leap where others dare to tread/My husband makes up stories in his head").

Director Victoria Bussert and music-director Nancy Gantose-Maier wisely concentrate on putting the talented cast in the best positions to deliver their musical blockbusters. As a result, the first act is studded with stellar moments. Christine Janson comes perilously close to over-doing her Kraut-shtick as Mama Maddelena in "The Germans at the Spa." But she keeps it under control, and the song dazzles, thanks to her backup fräuleins, dressed in white and black.

As Mistress Carla, Trista Moldovan is decked out in a black-lace body stocking, so hot she could pop old Federico out of his crypt. And she invests so much sensuality in "A Call From the Vatican" that the pope's specs may still be fogged over. Maryann Nagel is also excellent as Liliane La Fleur, Guido's always complaining producer, leading the company in the show-stopping "Folies Bergères" with slick professionalism.

A standout performance, although largely mute, is turned in by Aric Generette Floyd as young Guido. Blessed with natural stage presence and a face that could light up Venice, Floyd has the youthful charisma that we easily believe could grow into Guido the elder. His juicy encounter with the prostitute Saraghina (a lusty Cassandra Goldbach) and their tarantella-inspired song "Ti Voglio Bene/Be Italian" are perhaps the most frankly Fellini-esque of the scenes. And Joan Ellison, lending her lovely soprano voice to "A Man Like You," plays Claudia, the woman whom Guido always casts as the "healer of the spirit."

The second act is much shorter and thinner than the first, and is highlighted by an "original Contini" film, featuring the director as Casanova and accompanied by the operatic strains of "The Grand Canal." Directed and produced by Ohio filmmaker Kasumi, this film segment melds Monty Python-like visuals with black-and-white footage from old movies, and splices in stills and live-action segments featuring the company of actors. Five minutes of this flick would have been genius, since it is arresting and quite witty in places. But it rolls on far too long, re-using visual effects so much that it eventually feels like the repeating background graphics in old cartoons.

Ultimately, the play only scratches the surface of Guido's intricate, earthy personality. Fabio Polanco looks imposing as Guido, befitting an international film director, but he doesn't exude the charm and hypnotic sexuality that would draw so many women to his flame. He speaks in flat American tones that don't add pizzazz to an Italian dude packing serious salami. Although his voice falters at times, Polanco handles most of his singing duties with strength and clarity.

Tracee Patterson plays his long-suffering wife, Luisa, and she uses her redoubtable acting chops to flesh out a very sketchy character. Required as she is to pout, flare up in anger, then forgive, Patterson brings great feeling to her role, especially the solo "Be on Your Own." But even she can't make the hugely unlikely ending ring true. Still, while the material is less than perfect, if you just focus on the music, Nine is quite often a "10."