A girl starving for marriage gets fed up in Sweet Charity. 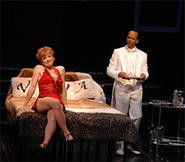 Most of us are drawn to the perennial "whore with a heart of gold" character, probably because we see a lot of ourselves in her. Sure, she's seedy, needy, and a little common, but she means well and, darn it, she deserves a chunk of good luck, doesn't she?

The title character of Sweet Charity, now at the Porthouse Theatre, is just such a person, hoofing it for money with sweaty creeps, but hoping to find the guy of her dreams somewhere in a constant stream of losers. This Neil Simon story, enhanced by Cy Coleman's jazzy score and some clever lyrics by Dorothy Fields, was pretty dated four decades ago, and it hasn't gotten much fresher since.

But the original was galvanized by the incredible Bob Fosse, who staged it in his angular style and wisely cast his wife, the inestimable Gwen Verdon, as Charity herself. This Porthouse production, under the direction of Terri Kent and choreographed by John R. Crawford, gathers some credible performances and manages to generate real hilarity in a couple of scenes. However, the vapid plot and some pacing problems keep this version from truly soaring.

Our heroine, the romantically named Charity Hope Valentine, is not literally a hooker (wink, wink), but a New York City dance-hall hostess, who is a bit dog-eared after having her wares thumbed through by too many grubby-fingered customers. Of course, she falls for nearly every one of them until they wind up robbing her, pushing her in the Hudson River, or otherwise stomping on her dreams. Setting aside the crass sexism inherent in the whole setup -- that young women have only one chance at happiness: finding a man -- there is a core truth about Charity's lust for love that is undeniable.

Fortunately, MaryAnn Black is able to tap into Charity's vulnerability and cute-as-a-chipmunk spunk. But Black is no spring chicken (she may not even be a summer chicken), and this demanding role sometimes leaves her visibly gassed after strenuous dancing and singing episodes. She's still capable of executing practically vertical high kicks, but some of her dance solos feel more like a recital than an inherent component of the story.

The other dance-hall gals are led by Sandra Emerick as Nickie and Nicole Perrone as Helene, and each adds a gloss of verisimilitude with her seen-it-all expression and expressive dancing. The stage heats up in the "Big Spender" number as Nickie, Helene, and the others lure their clientele by assuming their Fosse-inspired poses: all clenched butt cheeks, shoulder shrugs, and crooked come-hither fingers. This duo is just as good later in the show, as they join Black in the sardonic "There's Gotta Be Something Better Than This."

After wasting her time with another clod who just wants her money in "Charity's Soliloquy," where the male dancer unintentionally comes off as gay, Charity literally stumbles into an encounter with movie star Vittorio Vidal (a nicely greasy Jim Weaver). Some of the biggest laughs of the evening occur in Vidal's opulent flat, where Charity tries to bed the lothario even as he's putting the moves on his pouty girlfriend Ursula (Sara Hymes). Whether she's hiding under the bed chomping on a sandwich or trying to insinuate herself into the pair's lovemaking, Black channels Lucille Ball and turns this scene into a lark.

Almost as amusing is her encounter with bashful Oscar, stuck in an elevator at the 92 Street Y. Eric van Baars is a small comic revelation as Oscar, internalizing his character's neuroses (including claustrophobia) with laughable but not overdone intensity. This Oscar is clearly a psychological basket case, but Charity's eyes light up like a pinball game when she learns he's single. Hey, even a barely functional man is better than no man at all, right?

In between these high points lie some arid stretches, such as the entirely gratuitous scene in the hippie-dippie Rhythm of Life church. (You see, jazz is, like, their religion. Like wow, man.) Completely unsupported by any character or plot lines, this lame digression seems an elaborate way of enabling a Simon gag, especially when Oscar explains their visit by telling Charity, "I joined the Religion-of-the-Month Club."

Also, a dance sequence called "The Rich Man's Frug" is undermined by S.Q. Campbell's black costumes, which make the purportedly Eurotrash snobs instead look like tacky cheerleaders and waiters at a style-challenged bistro. Still, the dance numbers keep coming, and by the time the marching trombonists appear in the fantasy number "I'm a Brass Band," you don't know whether to applaud Black or find her a cot.

Although there are some real yawn-inducing moments, the Porthouse players generally acquit themselves well, with Bob Russell in particular contributing three sharply contrasted bit parts. So the final result is a Charity sweeter than it might be in less capable hands.