Dropped by her label, singer Aimee Mann self-released her album and hasn't looked back. 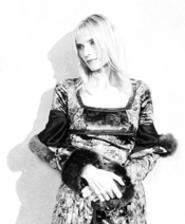 A couple of years ago, when Aimee Mann delivered a new album to Geffen Records, her record label at the time, its parent company was in the process of a merger that would ultimately unite two of the world's biggest music distributors and cut its new collective roster practically in half. Mann had a brand new album in her hands that her new bosses didn't like, and she was eventually left without a home for it. Making matters worse, the company didn't want to give back Mann's music. After extensive negotiating, Mann regained control of her album by buying it back from the label.

In the months that followed, Mann became the poster girl for all the refugees left homeless in the Polygram-Geffen consolidation that shook the industry last year. A 15-year veteran of the industry and a luminously astute singer-songwriter, Mann was one of many casualties in a marketplace that just wasn't interested in developing musicians anymore.

Mann proceeded to reassemble her new album, Bachelor No. 2, in preparation for its release through her own label, SuperEgo, and she contributed songs to Magnolia, which made her tunes, both old and new, the center of the film. All of a sudden, she was back in the game: The Magnolia soundtrack was rightfully celebrated, Bachelor No. 2 (which was initially available only at live shows and over the Internet) was well received, and the callous record company was starting to look mighty stupid for screwing her over and letting her go.

"I was never out for vindication, so I can't say I feel vindicated through all this," Mann says via phone, still sounding weary over the entire ordeal. "I'm just glad it's all over. It's like being in a haunted house, like in Poltergeist. You just want to get out of there, and once you are out of there, you never want to go back again. That's what the whole situation was like. I never, ever want to do that again."

Since most of Bachelor No. 2 was in the can when she left Geffen (she says a couple of songs were added as it was being prepared for indie release), Mann admits that it really wasn't that difficult to make the transition from being a major-league player to a minor one.

"There were no fears in doing this on my own," she says. "I was just so relieved to get out of there. Things were so bad that I couldn't possibly think of anything worse."

Song titles such as "How Am I Different," "Nothing Is Good Enough," "Fall of the World's Own Optimist," and "Calling It Quits" suggest Mann channeled her frustration into her songwriting. Still, Mann says very few scars remain from the battle.

"I really wasn't hurt by this," she says. "A lot of people rallied in support. My bio was written for free; my management put in a lot of free hours to make this work. It's nice to know you have friends out there, when a situation like this hits. A lot of people wanted this to work for me."

It's no surprise why. While Mann's work during the '80s -- she was leader of synth poppers 'Til Tuesday -- really doesn't give much indication of the talent that was bubbling inside her (though she did manage a Top 10 hit with "Voices Carry"), her debut solo album, Whatever, from 1992, is a mature and often profound exploration of modern relationships as seen through the eyes of a reluctant feminist. Its follow-up, 1995's I'm With Stupid, is more of the same, with some of the cynicism softened.

"I don't think my songs with 'Til Tuesday were very good," she confesses. "I was young and didn't really know what I wanted to say. Sometimes, I was just happy to make two words rhyme. I've grown since then. I can now explore relationships and characters with more feeling. It just wasn't there when I was younger. I also think I'm a much better singer now. I'm just more comfortable in what I do."

Which leads to Bachelor No. 2, which continues along the same path as its predecessors (although several of the songs can also be read as indictments of the music industry). Yet the protagonist at the center of it appears to be more comfortable, if still tentative, in her associations with others. And even though Mann married singer-songwriter Michael Penn while she was writing songs for Bachelor No. 2, the album still surveys the benefits and the downside of being single.

"This album doesn't celebrate being single; it explores it," she says. "Some of the songs were written while I was still single. I wrote about my single friends and even my own situation while I was still single. You want to be with someone, but at the same time you just want to be left alone. And the situation is still the same when you're married. You're never quite secure, no matter what the situation is. I don't know anyone who's completely secure. I'm very happy in my marriage, but then again, I really don't think there is anyone else out there for me."

Similarly, Mann's contributions to the Magnolia soundtrack, a couple of which ended up on Bachelor No. 2, are all about the bliss, heartache, and confusion of being in love (and essentially serve as another character in the movie). One of them, "Save Me," was even nominated for an Academy Award (and the sight of seeing Mann on stage at this year's Oscars was just as pleasing to watch as Elliott Smith's appearance two years ago). But Mann says that's about as far as she wants to delve into film.

"I enjoyed doing [Magnolia], but I don't have the craft to do an entire score," she acknowledges. "Michael does it. He has a whole bunch of stuff set up here at the house. I just look at it. I don't have the discipline, and I don't think I'm good enough to do something like that. I'll contribute songs to movies. In fact, I was asked to write one recently, but I couldn't. It just didn't come to me. If it's not there, it's not there."

And don't expect any thematic changes when Mann gets around to writing new songs. She says bitching about the events of the past couple of years in song just isn't her style. "My songs have always been the same: They're about relationships," she says. "That's what I write about. I really can't see me writing about anything else. When I start writing again, it's going to be the same thing. Even though I'm married, a lot of the feelings are still the same. It's just a different side."

Mann admits that, because of her heavy tour schedule, she hasn't had much time to write lately. Still, she says she's ready to start working on her next album. "I'd like to start writing again," she says. "We'll see. It should be easier to write now. I think, because I haven't done it in a while, I'm eager to write again."

She says she's currently writing a song, her first in a year, with Squeeze founder Glenn Tilbrook for his upcoming solo album. "He actually sent me part of it, and I added some things, and it's been going back and forth for a while," she laughs. "But it's not even my song. It's from the perspective of a single guy having an affair with a married woman."

She thinks about this for a minute.

"It's still me, though," she says. "There are all these moral questions and consequences regarding the relationship. So, I guess it's still sort of my territory, isn't it?"