With Medications and the Perfect Guy. Sunday, May 22, at the Grog Shop. 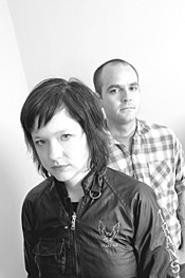 Effortlessly elegant and cerebral, Mary Timony is progressive rock's poster girl. She first became Queen Crimson with 1997's Magic City, an album filled with swirling synthesizers, folk-faerie melodies, and elaborate portraits of "Medieval People" and "Cosmic Rays." Indie rockers tend to address such subjects ironically, but Timony's teardrop eyes never wink. She's one of modern music's most uncompromising artists, secure about her somewhat awkward stage presence and wispy, windblown voice. She doesn't hide behind a costumed character, as if she were leading a Renaissance fair's touring company. Instead, she's just a normal-looking woman who happens to love dragons and unicorns. In her trio, Helium, Timony sang about sex, vampires, and violence without any bad-girl affectations, making the content even more compelling. Her solos made her guitar strings sound elastic, as if they were drooping and dangling. On this year's Ex Hex, her third release under her own name, Timony strips her once-ornate compositions down to their garage-rock guitar-and-drums skeletons. This album's raw aesthetic should ensure jarring juxtapositions in the set list, with the new tracks recklessly crashing into her epic fantasias.