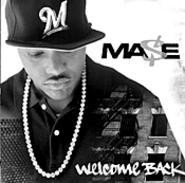 On his first release following a five-year break for the ministry, P. Diddy's old sidekick has created something even his marketing-savvy mentor never accomplished. Welcome Back is the perfect Wal-Mart version of a state-of-the-art hip-pop album, with every ode to floss and sugary, recycled hook intact, but minus all those annoying bleeps. If that sounds like a putdown, it isn't: The novelty of making it through such a disc with no gratuitous profanity and the occasional reminder that "love don't run the streets" is worth experiencing, a reminder of an innocence that hip-hop had long outgrown when Mase debuted.

More significant, while his elementary mic style and knack for the corny (see the Kotter-flipping title track) have remained intact, those qualities also create disarming moments of sincerity now foreign to the urban mainstream. The unlikely but heart-tugging chorus "I'm in love with a girl from Mississippi named Twyla/I'm in love with a girl named Twyla Bentley," delivered in a homely croon, is one example. Of course, if you want clean and catchy hip-hop that might also stir your gray matter, guys like Young MC are still doing it well and can't get arrested. But Mase should get credit for the courage of his convictions as well as his commercial appeal.