With Rune. Thursday, April 29, at the Grog Shop (late show). 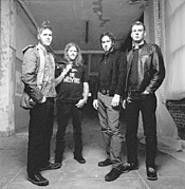 Some bands go for heaviness in pursuit of a stripped-down, doom-crying take on the blues. Others are heavy because they're too stoned to play fast. But very few acts pursue heaviness as a virtue in itself. Mastodon does. Its purpose is to crush audiences into submission -- a common goal in today's metal scene, but few acts pack the requisite power. Mastodon's music will hurt you.

Guitarist Bill Kelleher and drummer Brann Dailor formed the group, with guitarist Brent Hines and bassist Troy Sanders, after leaving Steve Austin's Texas-based noisecore outfit Today Is the Day, legendary for its high turnover rate. Their debut EP, Lifesblood, and their full-length album, Remission, are both out on Relapse.

Mastodon takes some getting used to. Through big enough speakers, Remission sounds like the band's namesake animal is leaning its full weight on the listener's chest. And in fine post-hardcore fashion, the band has little or no time for subtlety or melody. Their rhythms may be intricate and their riffs knuckle-bustingly impressive, but don't hold your breath waiting for a hook or a chorus. A live Mastodon set is one of the most endurance-testing experiences in music. Are you ready?