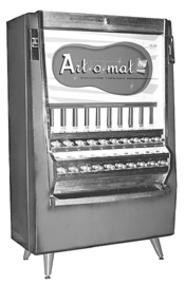 The thrill of dropping a couple of quarters into a machine and receiving a prize isn't only for kids; it's just that adults have outgrown miniature football helmets and plastic bracelets. But conceptual artist Clark Whittington of Winston-Salem, North Carolina, knows that adults never outgrow their delight in surprises, which led him to envision an art vending machine. After a friend in the tobacco industry suggested he use now-banned cigarette vendors, Whittington has been selling art to the masses with the Art-O-Mat.

"It looks like a cigarette machine from a distance," notes Kristen Chambers, curator at the Cleveland Center for Contemporary Art, which recently acquired one of the machines. "I don't think people quite understand what it is they'll get, which is a shame. It's just a way to let people who can't afford big works of art have original works."

After the original Art-O-Mat -- which dispensed Whittington's miniature paintings for $1 each -- was unveiled at a show in 1997, he established Artists in Cellophane, a group of 100 artists who fill more than 20 of the specialized vending machines at venues like the Whitney Museum of American Art and the Andy Warhol Museum. Which is amazing, considering he was planning to dump the original machine after the show. "This is something really odd," Whittington admits. "Every once in a while, I just kind of look at it and wonder what's going on."

It works because it's fun, Chambers says. "There's this element of surprise. We've started playing around and pulling levers, just to see what came out."

Now priced at $5 each -- to pay the artists, for maintenance, and to help arts-related charities -- the original art could be anything from miniature paintings and charm-sized sculptures to fine printwork and poetry. Each lever is labeled, but like the gumball machines of youth, the labels only give you an idea of what you'll get.

For Whittington, that is the only drawback. "People want the best for their money," he says. "Sometimes it's hard for people to take a risk, just to open up to something. But each piece is made by a human that is trying to give art a stab."

Artists in Cellophane has in fact become a proving ground for starting artists, willing to get their names out any way possible, and established artists needing a little forced regimen to get them on a fresh track. "And it does bypass some of the pretensions of art, because it just throws it right in front of people's faces," Whittington adds.

Most of the Art-O-Mats are in art centers, but Whittington hopes to further cut through the pretensions and put them in "less predictable" places like businesses -- a move that might horrify art connoisseurs, but that he sees only as a positive.

"It's better if someone doesn't try to make [Art-O-Mat] more than what it is," he says. "Just let it do its thing. It's much better that way, and the machines are happier."