Matron of the Arts

Fest founder knows where you can buy a painting real cheap. 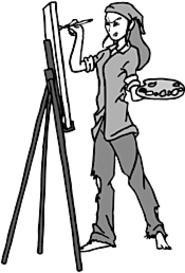 As the "founding mother" of the Clifton Arts & Musicfest, Carol Johnson swears that you don't have to go broke buying a nice piece of art. "I figure someone can go home with an original that doesn't cost them any more than $10 or $15," she says. As money changes hands between buyers and more than 90 exhibitors, "We have people comment on how we expose them to some very nice artwork without making them [feel] insulted" that they can't afford pricey pieces, Johnson says.

Along a five-block stretch of the boulevard, artists and food vendors peddle their creations. Near West 117th Street, a tent is set up for a juried art show, in which votes are cast for the Most Popular award. At West 112th Street, a stage is assembled for performances by Elysia, the Prayer Warriors, Roberto Ocasio's Latin Jazz Project, and the Swing Time Band.

All the while, Johnson watches from her perch inside an information booth. "It's wonderful that people in Gates Mills like [expensive] stuff," she says. "But we're not them, thank you very much." The fest happens 10 a.m. to 6 p.m. Saturday on Clifton Boulevard between West 112th and 117th streets. Admission is free; call 216-228-4383. -- Cris Glaser

Vida Prekler is a matchmaking machine. Every year, she puts together Where the Boys Are, a bachelor raffle in which women purchase tickets for a chance to go on dates with tuxedo-clad single guys. "It can be as simple as coffee and a movie, or as elite as theater and a high-end restaurant," Prekler says. But before the raffle, a background check is done on the 100 guys. "We're looking for -- No. 1 -- that they're not married," Prekler says. If a date doesn't work out, the men are given the phone numbers of the women whose names weren't drawn the first time around. "Sometimes, there may be another lady that met their fancy," says Prekler. "We've never had any fights over that." It happens 5:30 to 10:30 p.m. Thursday at Executive Caterers at Landerhaven, 6111 Landerhaven Drive in Mayfield Heights. Tickets are $35 and $40; call 440-358-0864. -- Cris Glaser

Anime-niacs Unite!
A film fest for people who like racy cartoons.

There's a good reason Mike Beargie put together Saturday's Anime Film Festival: People like the stuff! "The average Google search under "anime" will yield 60,000,000 results," he claims. "Plus, if you're a 40-year-old guy who likes Sailor Moon, no one holds it against you." Presumably, because Japanese animation -- with its titillating stories and barely clothed heroines -- isn't just for kids. Beargie and co-coordinator Justin Adkins are hoping for "the look and feel of an anime convention," Adkins says. In addition to the films that will be unspooling, discussions and contests will round out the day. Best of all, it's free. It happens from 1 to 8:30 p.m. at Lakewood Public Library, 15425 Detroit Road in Lakewood; call 216-226-8275. -- Lucy McKernan

Clevelander Dan Chaon was nominated for a National Book Award for his 2001 story collection, Among the Missing. He's just published his first novel, You Remind Me of Me, which follows three disparate characters -- a little boy, a pregnant teen, and a drug dealer -- whose paths eventually cross. Chaon signs his book at Lakewood Public Library (2174 Arthur Avenue in Lakewood) at 7 p.m. Thursday. Admission is free; 216-529-9019. -- Michael Gallucci