The Singer-songwriter Has Suddenly Become A Headline Act 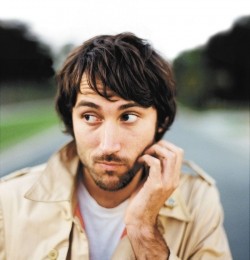 Southern California singer-songwriter Matt Costa has had a few lucky breaks in his burgeoning career, but it was a particularly unlucky break that really set everything in motion. Seven years ago, at the age of 19, Costa was spending his waking hours skateboarding with his crew, all of them with designs on going pro.

"I was like, 'Hey, if I can get free skateboards and get to travel around, and people wanna pay me money to skateboard,' that's what I wanted. That was my goal," Costa says over the phone from the back of his tour bus, which is rumbling toward Rochester, New York.

At that point, things were going well. He and his friends had gotten sponsors, and it looked like his goal was coming to fruition. And then, one afternoon, as he was trying to stick a landing off a ledge, Costa's leg shattered. Visions of skating exhibitions around the world were soon replaced by the reality of multiple surgeries, followed by 18 months of bed rest and physical rehabilitation. It was then that Costa turned to his other love - music.

"Before my accident, I was playing a little bit, I guess. Music was just an itch that needed to be scratched. It was a rash on the surface, a little bug bite. And now it's a bleeding sore."

Costa lets out a laugh, which seems even more booming than it really is, given his usual easygoing, soft-spoken demeanor. He's a friendly guy, prone to brief pauses before offering thoughtful answers to questions posed, however many times he's heard them before. This year especially, he's been peppered with interviews following the January release of his breakout disc, Unfamiliar Faces - Costa's second full-length and fourth release in all, if you factor in two early EPs.

Faces puts on display an artist with a knack for winning melodies and an impressive songwriting acumen that belies his 26 years. It's also the work of a musician who's absorbed tons of influences - in Costa's case, Brit-rock, from the Beatles to the Verve; old-timey American folk and country music; and other favorites, including Donovan, Nick Drake, Fairport Convention and Van Morrison - and then refashioned those sounds into something both fresh and familiar, neither conspicuously modern nor retro, ultimately classic-sounding and compelling.

Most of its dozen tracks center on a brightly strummed or tenderly picked acoustic guitar, with the bounce of a piano, the sporadic chomps of electric six-string and the occasional appearance of harmonica, trumpet, strings, mandolin and gentle percussion to thicken things up. Overall, the mood is one of wide-eyed wonder and optimism - opener "Mr. Pitiful" is sweet and upbeat, defying its title as it romps like a cousin of the Beatles' "Ob-La-Di, Ob-La-Da" - although several songs (notably "Bound" and the title track) are shot through with a strong dose of rainy Sunday-morning melancholy.

Throughout, Costa's tenor is a marvel and a comfort; think Richard Ashcroft sans the conceit, or Jeff Buckley in his less-acrobatic moments. Sometimes his is a sharp delivery, other times it's a more whispery croon, and he always sells his words convincingly, whether he's singing fancifully or more concretely.

Long before he ever got a skateboard, Costa was messing around with musical instruments. Growing up in Huntington Beach, California, he remembers learning how to play cartoon theme songs on his aunt's piano; his parents soon enrolled him in piano classes, but he balked at learning how to read music and the lessons quickly ceased.

"And then I remember that for hours - I dunno if it was a good thing or a bad thing - but I'd be entertained by banging on a bowl," chuckles Costa. "I would sit there and hit it in different areas to get different sounds, and then I would spin it on my finger and hit it as I spinned it, and I was so amazed by that. Actually, gimme a bowl now and I can still be amused by it. My parents were thrilled. I tried to make up for it by reading some fine literature. 'Ah, our son - he plays with a bowl and he reads John Steinbeck.'"

Indeed, Steinbeck was as big an influence on Costa's nascent songwriting as any band - among his earliest tunes were "Sweet Thursday," named after the author's 1954 sequel to Cannery Row, and "The Ballad of Miss Kate," titled after one of the main characters in East of Eden (both songs appeared on Costa's 2005 EP, Elasmosaurus). And, the singer adds, his newest song - which he penned in Spanish and might unveil during this tour - was directly inspired by the interlocking stories that appear in The Pastures of Heaven, one of Steinbeck's earliest published works.

"When you're reading his books, it feels like you're understanding things at a more mature level, but he breaks it down and makes it simple," says Costa. "It's a read for everyman. He's not trying to strain your brain - he's just giving it to you straightforward, and it's something that you can actually use in your life. Also, when I started writing songs, I tried to look at it as I would look at a Steinbeck book, in the sense that when someone would look back on it 60 years later, would it still hold up well?"

Costa wasn't the only one who thought his songs - which he'd begun laying down on a four-track recorder and passing around to friends - might actually stand the test of time. When one of his demo CDs found its way into the hands of Tom Dumont of No Doubt (one of those lucky breaks), the guitarist spied Costa's vast potential and invited him over to his home recording studio to produce some of Costa's material.

"Every week I'd go to his house and I'd have a new song written and I'd record that song, and it was the kind of thing where through that I'd just come over and show him whatever records I was into, and we'd share music - and we ended up hanging out a lot and becoming really close friends," recalls Costa. "I'd go over there at five in the afternoon and not leave until four in the morning, and go home with a disc of ideas we'd recorded that day and all the things we talked about, like books and things like that. It happened really naturally, and so much was created out of it. He was really a mentor."

Though Dumont never participated in the actual writing process, he was instrumental in getting Costa's music out to the public.

"Once we started having more and more songs, he was like, 'I'll help you release these; let's put 'em out together.' I'd put out some stuff before on my own, but we decided to print up a really small amount of these EPs. I'd been doing shows around the Southern California area, and then we printed the CD up and I started getting more gigs because of that. Next thing we knew, we had all these songs and all these ideas, and it was like, 'Well, why don't we just keep going with this? Let's put out a record.' So I kept going and we made [debut album] Songs We Sing. Everything I've done so far has been with Tom, and it's been a really good process."

Lucky break No. 2: Costa's albums caught the ear of Hawaiian-born songwriter-surfer Jack Johnson, whose star was really on the rise. Impressed by what he heard, Johnson signed Costa to his own Brushfire label and took him out on the road as a support act. Since then, Costa has opened for the likes of Modest Mouse, G. Love, Built to Spill and My Morning Jacket, and now - with a growing fan base and much critical acclaim heaped on Unfamiliar Faces - he's become a viable headline act.

And these days, Costa still gets on a skateboard from time to time, but he has no regrets about the twists his life has taken. "I guess I transitioned pretty easy," he says. "I would lose hours on end skating, and now I lose myself for hours and hours making music. That's all I really did it for. I guess people have liked it, so it's turned into something more, but when I'm writing songs or playing live, creating that feeling of escape or sending my thoughts or your thoughts into another world - I'm all for that. That's my goal now."