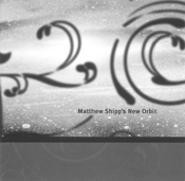 Pianist Matthew Shipp is perhaps best viewed through the prism of David Ware's performing and recording quartet, in which he is a longstanding member. As Ware has sculpted his own sound through a series of complex albums, Shipp has steadfastly remained the band's frontal lobe, adding a harmonic counterpart to Ware's tumultuous free flights. His own albums have been vastly eclectic, ranging from complex solo excursions that find him riding the scales for 60-plus minutes, right down to almost gospel-influenced group outings such as last year's Pastoral Composure. Part of an ongoing jazz series called the Blue Series -- of which Shipp is the curator -- this album introduces his latest working unit. Consisting of trumpeter Wadada Leo Smith, drummer Gerald Cleaver, and bassist William Parker, who has worked on and off with Shipp for 17 years, this group isn't so much a "new orbit" as it is a continued swirl in each player's musical constellation.

With this group, Shipp once again explores harmonic territory that relies solely on each member's improvising capabilities. More of a catalyst and less a formal leader, Shipp seems willing to let each band member have his own voice. Smith, for example, lends a Miles Davis quality to songs like "Chi" as well as the somber title track. On "Syntax" and "Chi," Shipp's piano arches the melody along in powerful and sometimes ominous clumps, proving he's the spiritual heir to Cecil Taylor (as many critics have been saying all along). He's also capable of neoclassical perfection, as in the solo piece "Orbit 2." At a time when the music industry seems more intent than ever on hemming artists in, Shipp remains one of the few who is willing to challenge its well-established parameters.