May the Farce Be With You 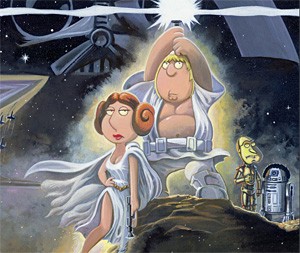 TOP PICK — Family Guy: Blue Harvest (Fox)
Blue Harvest was the top-secret code name used by George Lucas and crew while they were making Return of the Jedi. It's also the title of Family Guy's sixth-season opener, in which the animated series' characters star as Luke Skywalker, Darth Vader, et al. in one of the sharpest Star Wars parodies ever made. This DVD includes clips, commentary, and an interview with good sport Lucas, who lent original sound effects to the project.

CD — Beck! Odelay: Deluxe Edition (Geffen/UME)
Beck's 1996 masterpiece gets a two-disc makeover, complete with previously unreleased outtakes, remixes, and a bunch of cool B-sides. The oddball singer, along with producers the Dust Brothers, assembled a genre-jumping mix that spanned pop, rock, blues, hip-hop, and a bunch of other styles. A dozen years later, it still sounds like nothing else out there — not even the countless records it influenced.

BOOK — Rock & Roll Heaven: A Fascinating Guide to 200 Musical Icons Who Have Joined the Great Gig in the Sky (Barron's)
Still wondering how Mama Cass Elliot died? (No, she didn't choke on a ham sandwich.) This morbid book will set you straight, lining up the facts about Freddie Mercury's and Dimebag Darrell's deaths — AIDS and shot by a crazed fan, respectively — and detailing Lynyrd Skynyrd's fatal plane crash. Plus, it's a handy is-he-dead-or-not? reference tool. We can't wait for volume two, starring Pete Doherty and Amy Winehouse.

BOOK — 33 1/3: Tom Waits' Swordfishtrombones (Continuum)
Before 1983's Swordfishtrombones, Waits was an idiosyncratic singer-songwriter with a raspy growl and a jazzy backbeat. Then he got weird. David Smay's outing for the terrific 33 1/3 series looks at Waits' transformation from prose-spouting beatnik to artsy noise merchant. He also breaks down all the elements that went into Waits' best album — from trash-can percussion and spooky loops to that fractured voice from Mars.

DVD — Zodiac: 2-Disc Director's Cut (Paramount)
Last year's most overlooked and underrated movie ranks right up there with director David Fincher's Se7en and Fight Club. But the charge here is cerebral, not visceral, as detectives and reporters obsess over a serial killer who terrorized San Francisco in the late '60s. It's based on a true story, which is chronicled in the bonus disc's riveting documentaries. Zodiac also features one of the year's best ensembles, led by Mark Ruffalo and Jake Gyllenhaal.

COURTESY FLUSH, PLEASE — NFL Tour (EA Sports)
With the Super Bowl wrapping up football season this week, we were hoping to turn to this video game for our weekly pigskin action. Too bad it's such a clunky mess. Players take the controls (of the Xbox 360 or PlayStation 3) as real-life NFL stars in a no-boundaries street version of the game. That means gravity-defying leaps, bone-crushing tackles . . . and the most unbeatable CPU ever. Penalty!