May the Force Be Hip Too

What's wrong with indoor soccer? Nothing that some beer, hot girls and a new coach can't fix. 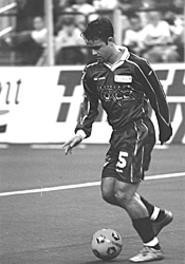 Eric Dietrich felt the buzz at a basketball game last year. He cased the arena and watched how the crowd got caught up in a good game of hoops. If the excitement could escalate in a sold-out basketball arena, he thought, it could certainly get crazy at an indoor soccer game.

The vice president and assistant general manager of the Cleveland Force, Dietrich had that night in mind when he introduced the "Club Section" concept for this season (the home opener is on Saturday against the Philadelphia Kixx). The intent is to make the atmosphere at Force games as raucous and fun as it is in the much-larger Cavs and Browns crowds.

"What do [guys] like?" he asks. "We like to sit there and have a beer and talk to pretty girls, and we're at a sporting event. How bad can that be?"

Not bad at all, if you like "bottomless" kegs of draft beer, a private bar with closed-circuit TV screens, and the team's new Force Energy dancers shmoozing the crowd. For 30 bucks, fans can sit in prime seats at the Convocation Center and drink all the brew they can stomach. "Now you've got the club seats," says Dietrich. "Now you've got the video boards. Now you've got the dancing girls. Suddenly, it's a dramatic change."

So is the team's roster. Gone is 16-year all-star Hector Marinaro -- indoor soccer's all-time leading scorer, who was left unprotected in this summer's expansion draft and selected by the new Chicago Storm. Also gone is coach Andy Schmetzer, who was fired in March. In Schmetzer's place is ex-Force defender Omid Namazi, who guided the club to its second straight Major Indoor Soccer League playoff berth last season (before losing to the Dallas Sidekicks in the quarterfinals). "He's a natural leader," says Dietrich. "He understands the game. And by being an ex-player, he has the respect of the guys around him."

One of those guys is promising 23-year-old forward Adauto Neto (pictured), a Brazilian native who's in his second year with Cleveland since coming from Syracuse. Racking up 31 points last season, he's the Force's leading returning scorer. "He's a superstar in the waiting," says Dietrich. "He's going to be the best player in the league. He does things out there that you watch him and go, 'That's why he's playing.'"

To some, Neto will play in the shadow of Marinaro, who stunned fans when he said he'd lost respect for the Force front office and didn't want anything more to do with them. Dietrich, however, is ready to defend his club. "This is not the NBA," he states. "You don't have a Michael Jordan [who] can carry you all the way. Do we miss his veteran leadership? Of course. Do you miss the fact that he's the all-time leading goal scorer? Of course. At the same time, that's why we have these other guys. This is a team sport. You're not going to win on one guy alone."