Measure for Measure finds the Bard in a decadent mood. 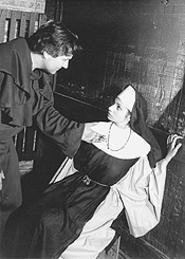 Anyone lucky enough to have spent last Saturday at the Cuyahoga County Archives to catch Cleveland Public Theatre's Measure for Measure got more than they bargained for: a storm-tossed adventure worthy of King Solomon's Mines.

First, we encounter that new-age Harold Hill, CPT founder James Levin, doing his season-opening spellbinder routine, selling engraved bricks and paying tribute to the old bricks that made CPT what it is today. The Shakespeare production itself is youthful and vibrant. The best of the in-your-face old CPT with the tough, multiracial street urchins, who make up in zest and attitude what they lack in acting skill, happily coalesced with the new, high-powered, deluxe regime. The performers in the five leads were so highly charged they could illuminate a skyscraper.

Measure for Measure, a hit of the 1604 London theater season (called a "wow" by noted Elizabethan critic Lord Bertram Goosenberry), is one of Shakespeare's darkest, surliest, and most intriguing works, a verbally ornate scandal sheet, cataloguing every moral failing short of halitosis.

Wily, manipulative Duke Vincentio (Dana Hart), weary of fame and burdened with a debauched populace, disguises himself as a monk and appoints in his place Angelo, a hypocritical lecher. In his nefarious disguise, he hands out false absolutions, extracting confessions from unaware dupes, manipulating like a power-mad Dolly Levi, driving members of his court into unwanted nuptial bliss. Eventually he waylays for himself neurotic novice Isabella (Tina Guster), who had hopes of devoting her life to impressing all with her ostentatious purity. And guess what, folks? The Duke is the hero, the comic controller of a menagerie composed of sadists, masochists, religious zealots, and hypocrites. This, no less, is the ideal black comedy for the age of Clinton, with lechery and self-righteousness. This is sour Shakespeare on his way to the majestic pessimism of Troilus and Cressida.

Nobility and virtue are slightly embarrassing set in the present. Decadence, however, is eternally au courant. Director Timothy Saukiavicus (as most directors of this show) can't resist the temptation to give this show a leather-bar punk ambiance. Cunningly, he starts his production with a ghoulish nod to old decorum, with his play's court engaging in a macabre Edward Gorey-ish waltz set to The Blue Danube, with strutting bad boys and brassy harlots stuffed into tawdry evening gowns.

Allan Byrne leads the waltz in demonic intensity. His puritanical Angelo dances with a strumpet, revulsion intermingling with lust, to mirror the play's battle between passion and piety.

At the heart of the production is the volcanic confrontation between outraged virtue and unearthed sexual obsession. Guster's Isabella is the evening's self-appointed angel of virtue. She would rather see her brother beheaded than sacrifice her chaste treasure to save him. Decked in a nun's veil and simple schoolgirl shoes, she begins as innocence personified, with doe-like eyes shining like votive candles. Her foil, Angelo, in Brooks Brothers armor, is truly made frightening by Byrne's worm-eaten, crabbed fanaticism. Half anguished conscience, half sadistic hypocrisy, he flashes eyes that bug with the unbridled lust of a silent film villain. After four hundred years, this is a confrontation worthy of King Kong vs. Godzilla.

Hart makes Shakespeare's enigmatic Duke twinkle at his own wisdom. A self-assured buttinsky, he's Richard Gere sans glamour. As the ancient Lord Aescalus is the even more ancient and beloved thespian Ted Burr, who, as Hamlet advised, speaks "the speech trippingly on the tongue." In a cast that seems to be influenced by the loud hues of hallucinogenics in a trippy netherworld, only Burr speaks of poetry and delicate emotions.

The director ends up putting a nasty, nihilistic spin on an already ambiguous work when he brings out the once-pure Isabella in a perm and a clinging, slip-like gown. Her moral fervor has been desecrated, her response to the Duke's shocking marriage proposal is cynical jubilation. The play ends with her straddling the throne like a triumphant trollop. Here, all end in the gutter, with no one looking up at the stars.

Almost all the performers have a tendency to race through their lines, yet most speak clearly enough to make sense of their parts — though some sounded like their mouths were benumbed by Novocain. A downpour put them to the test, turning their production into peripatetic Bard, forcing them to perform their turns in the Felliniesque confusion of a concession tent. Within inches of the audience, they not only kept their concentration, but rendered the play much more vigorous and exciting than in the Druid-like catacombs of the original set. The players may have gotten wet, but the Shakespeare never got soggy.