Meat of the Matter

Westlake's Hyde Park isn't everything an upscale steakhouse should be. 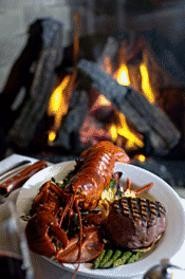 Say what you will about the shortcomings of Cleveland's dining scene: Never in our history has it been easier to score a world-class slab o' beef. Between the influx of upscale steakhouse chains, including Morton's, Ruth's Chris, and Fleming's, and top-rated local options like Red, XO, Delmonico's, and Fire (technically not a steakhouse, but just try that tandoor-seared rib-eye!), we're awash in beefy options. Maybe all that competition is why our recent trips to Westlake's elegant Hyde Park Prime Steakhouse in Crocker Park didn't rock our socks. Lovely surroundings notwithstanding, the food at the nine-month-old restaurant was a little off the mark, and service lacked a certain grace. As a result, we can't say we'll rush back there the next time we have a hankering -- and the money -- for a $35 strip steak.

Specializing in bodacious wedges of prime beef, seared to order at 1,800 degrees, the upscale restaurant is one of eight Ohio steakhouses owned and operated by Twinsburg-based Hyde Park Restaurant Group, and sits immediately adjacent to its other Crocker Park enterprise, Blake's Seafood Restaurant & Bar. (The company also owns and operates another Blake's, in Chagrin Falls, and downtown's popular Metropolitan Café, in the Warehouse District.)

While the amenities are polished, and prices on the à la carte menu are predictably high (management estimates the average dinner check is around $60 per person, and specials -- like a recent Saturday-night lobster tail -- can run as high as $80 on their own), the restaurant makes a conscious effort to appeal to casual shoppers as well as to the usual high-end restaurant-goers looking for a night on the town. Khakis and jeans are as welcome as suits and dresses, for instance; a children's menu and high-chairs are available; and with the exception of the downtown Cleveland location, this is the only Hyde Park Prime that's open for lunch.

Of course, that egalitarian approach can sometimes backfire, as we discovered on a recent Saturday night. Happily ensconced in one of four separate but interconnected dining rooms and spending money as though we had just chopped down the moolah tree -- on $11.35 Bombay Sapphire martinis, up, with blue-cheese-stuffed olives, and seasonal stone-crab claws at $19.95 a pair -- we found ourselves sitting cheek-to-jowl with a family of five. Although their toddler remained cool and composed as a snowflake, the relatively leisurely pace of the evening's fine dining slowly drove the family's patriarch to madness -- to the point that he eventually began pounding on the table, shouting at staffers, and truly disturbing his nearby neighbors.

If we had to guess, we'd venture that these folks would have been better served by a more family-friendly spot, like the nearby Champs, Hoggy's, or Brio. And among other, less charitable notions, the commotion made us think that Hyde Park might do well to start posting its menu, complete with prices, outside the front door, as most of its competitors already do. That way, potential diners could decide whether the place is really a good fit for their time frames and lifestyles before they take a seat.

The screaming and fist-pounding also got us thinking about how it happened that neither the server nor the managers had been able to head off the guy's gradual meltdown before it reached critical proportions. Yes, blow-ups happen, and some guests simply cannot be mollified. But this guy had been grousing about the slow service for at least 20 minutes prior to his outbreak, without getting any apparent satisfaction. Just as troubling, once the family finally left, staffers went on as if nothing much had happened. In contrast, after similarly dicey moments at other fine-dining spots, we've seen servers and managers try to restore the gracious ambiance by offering individual apologies, and even complimentary desserts or after-dinner drinks, to the diners most affected. But nothing of that sort happened here.

And while we're harping on service issues, this might be a good time to mention our lunchtime waiter, a gregarious gent who seemed to confuse presumption with friendliness. Since I was dining solo that day, his chitchat initially made for a pleasant diversion. But soon, it turned odd and invasive. For instance, after an assistant had cleared away my lobster bisque bowl, he asked, in mock amazement, if I had eaten the bowl as well as the soup. Later, after I polished off a cup of cappuccino in less time than he apparently considered appropriate, he called me a "cappuccino freak." From a buddy, all that chutzpah might have been mildly amusing; from a stranger, it was just plain rude.

Happily, the food coming out of Executive Chef Rob Romph's kitchen is a little more polished than the service. Yes, both a two-inch-thick, 24-ounce, bone-in rib-eye and a trio of double-boned lamb chops arrived at the table unevenly cooked, so that they were medium rare in some spots but bloody raw against the bone. Likewise, a lunchtime Kobe beef burger, ordered medium well, arrived at the table still raw in the center. (The kitchen's appropriate response was to prepare an entirely new burger, this time done as ordered.) Admittedly, for a high-end steakhouse, those are pretty significant flubs. Still, Romph and his staff generally execute the menu with the expected degree of Hyde Park finesse. Sauces and salad dressings are made fresh on the premises, French fries are cut by hand, and a crumb-topped apple pie with a flaky pastry crust is baked à la minute.

Among the cuts of USDA-prime beef, diners will find rib-eyes, porterhouses, and both boneless and bone-in strip steaks and filets; all can be had simply seasoned and broiled, or gussied up with savory add-ons like bordelaise, garlic, mushrooms, blue cheese, or lobster. As a change of pace, the menu also includes those hefty, double-boned lamb chops, a 12-ounce veal chop, lemon-caper chicken, and a tempting-sounding slow-cooked barbecued pork shank. And for a more casual lunch or dinner nosh, that hand-formed Kobe beef burger, smothered in melted cheddar and snuggled down on a buttered and toasted onion roll, had succulence and delicacy to spare, even when cooked through, as ordered.

While red meat is the star of the menu, fish and seafood options should not be overlooked. Those pricey stone-crab claws, for instance? Profound indulgences, as ample and fresh as their price tag had promised. And a pair of panko-crusted, filler-free, pan-seared crab cakes, served on piquant twin pools of red-pepper aïoli and Creole mustard sauce, with a dab of homemade red-cabbage slaw? As rich yet pure as any fairy-tale princess.

To accompany the meat and seafood, the well-thought-out wine menu offers 40 or so whites and about 60 reds by the glass, as well as approximately 200 labels by the bottle. The mostly domestic selections are balanced between familiar and not-so-familiar labels and varietals, to satisfy both the novice and the adventurer, and most bottle prices land in the $35 to $75 range. (A reserve list includes the requisite high-end bottles of Silver Oak, Quintessa, and the like.)

Unless "defensive lineman" is listed on your résumé, assume that every dish on the menu is more than large enough to share. That goes double for the à la carte salads and side dishes. While the menu advises that the sides serve two, we could have easily fed four on the rich scalloped potatoes, dripping with melted Gruyère, or the creamed spinach, seasoned with a hint of nutmeg. Of course, the potatoes were slightly undercooked and crunchy, and the spinach tasted frozen, not fresh -- so possibly that helped curb our enthusiasm.

In the end, whether a restaurant measures up is all about expectations. And when a couple plans to shell out around $150, their expectations rightly will run pretty high. Should their hopes go unmet, restaurateurs then should expect those diners to look elsewhere, when the next time comes along. It's a neat little fulcrum for cause and effect. And there's just too much competition out there nowadays for anyone to expect anything else.