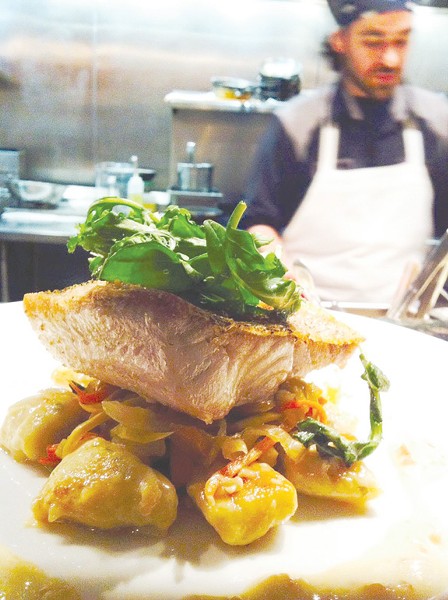 Martin McCafferty can claim the American railways as one of his greatest teachers. A self-educated chef, his love for trains lead him to kitchens all along the West Coast. When his hometown Medina reeled him back, he found a like-minded mentor in John Kolar, owner of Thyme (113 West Smith Rd., 330-764-4114, thymetherestaurant.com), who learned under the global cuisine master Jean-Georges Vongerichten. As chef de cuisine, McCafferty experiments with the cross-country tricks he's soaked up from every town and culture.

"If I have my way, you'll never see just one of those influences on a plate," says McCafferty.

Born on Cleveland's west side to a family with Irish and Sicilian roots, he learned the ropes at The Oaks and Main Street Cafe in Medina. Then he bought the Culinary Institute of America's textbook and worked his way through each chapter in his home kitchen.

In 2007, he landed a gig as a line cook at Moxie under Jonathan Bennett. Despite being a self-proclaimed rookie, his work ethic earned him a spot on the opening team of Red, the Steakhouse's Miami Beach outpost.

"Everything they rode me on made me a better cook and a better man," he explains. "In that kind of kitchen, you never make the same mistake twice."

It also was his first opportunity to flex his creative muscles. When his tuna tartare dish with fried plantains and Asian slaw moved from the specials to the regular menu, he realized he was in his element.

He left Red for the mountains of Wyoming to manage four from-scratch kitchens, including a hunting lodge where he learned to break down everything from ox to antelope to deer.

But the road soon called and he headed further west, working his way by train through Seattle, Napa Valley and San Diego. He relished the fresh ingredients of California cuisine, then zigzagged backed East, staging at famed Moto in Chicago and learning about molecular gastronomy.

When he returned to Cleveland, McCafferty cooked on the line at Lola. He then moved on to Tartine Bistro, where he worked as executive chef.

Since coming to Thyme, the chef added Kolar's Asian expertise to his repertoire, developing dishes such as shrimp with mango coconut curry sauce and Asian slaw. While he likes to take more risks with tasting menus, many of his favorite dishes, he says, "take something basic and tweak it into a fine-dining dish worthy of a high-end restaurant."

Molecular gastronomy makes an appearance in a scallop dish where carrots and thyme are made into a syrup and turned into flavor pearls. "I bring it in to challenge expectations," the chef says. "You're playing with their minds and that's the fun of it."

McCafferty encourages his own cooks to explore as he did, taking weekend trips to other cities to experience the sights and food.

"It reinvigorates the passion and when you get home, you've got that fire back," says McCafferty. "That's what, in my opinion, creates the staying power of a restaurant."