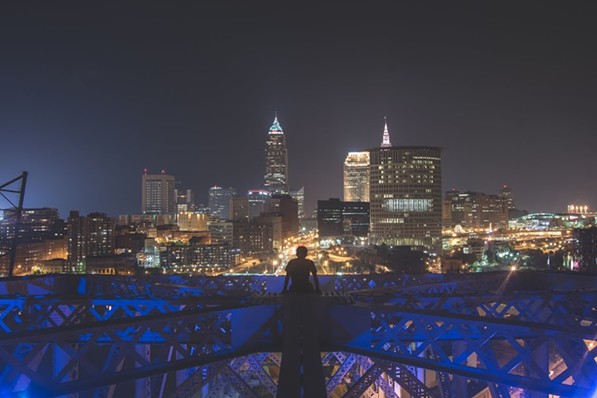 To most Clevelanders, the crane that arrived to help construct the new 32-story downtown Hilton hotel was just a crane, if they noticed it at all. A piece of construction equipment.

Kevin Inthavong (@churkh) mentions the crane just a few minutes into a recent chat at an Ohio City coffee shop. He's talking about the scope of the climbing community in Cleveland compared to cities like Chicago and New York. It's a small group, but you'd be surprised at how many of them there are and where they've been.

When Inthavong says "climbed the crane," he's being literal in one way and descriptive in another. He didn't scale the crane from the bottom while pulling himself up the outside of the equipment.

"There's a stairwell right in the middle of it," he says. "And if you go into the building, you go up and there's a platform you walk across to get into that and it's a few flights up from there."

So while he wasn't impersonating Spider-Man on the ascent, so to speak, he did climb onto the outside of the equipment once he was at the top.

Inthavong pulls out his iPhone, finding a picture he'd posted to Instagram of one of the nights he was up there. And there he is, left hand grasping a thick wire and his feet at the intersection of the crane's arm, the top of the Terminal Tower in the background and the pavement some 30 stories below. 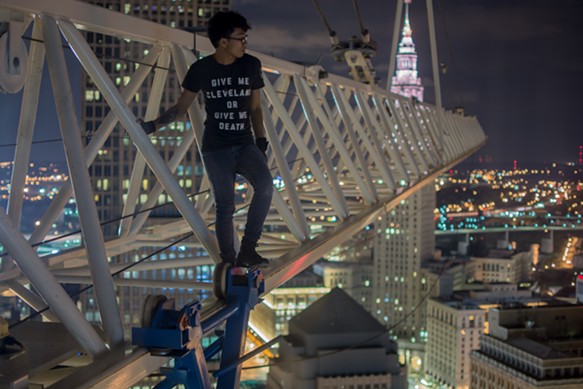 "I like to say that the construction company was probably aware of us," he says. "They made a barricade at the base of the crane and tagged someone else that had climbed it and posted a picture. We just laughed because that's not even how we got on there in the first place. We're pretty popular among their group, though, construction workers. I'm not special, I make that clear. If construction workers had cameras then I'd be out of business. They find our pictures though. 'You hear about these climbing kids?' you know. 'They do what we do.'"

Except the construction workers are supposed to be there. 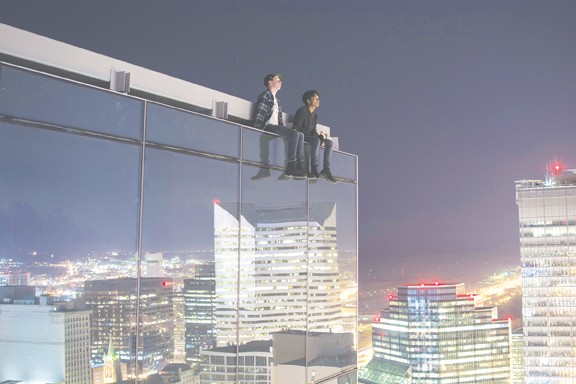 As long as there have been bridges and rooftops, there have been people on the top of both. The evolutionary differences here are two-fold: First, in the case of buildings, a rooftop barbecue is a far cry from sitting on the ledge of a high-rise you have no business or legal right to be on. (Which doesn't mean you should discount the very legal ways climbers gain access to roofs: Many times it's as easy as simply asking someone you know in the building. More on that in a little bit.) Second, the ability to take and widely share magnificent photos. Just because you (and we) started noticing them in recent years doesn't mean it wasn't being done before.

"The very first time I attempted to climb a lift bridge, in what must have been 2003 or 2004, I remember walking up to the lifter at the mouth of the river known as the Iron Curtain," says one climber who's been doing this for more than a decade and who preferred we not use his name. "When I got to within 20 feet of the bridge and paused to figure out a game plan, my eyes focused on the bridge and I realized there were at least six people scattered all over the bridge wearing all black with white bandanas over their face. One of the strangest things I've ever seen while out exploring. Just goes to show that people have likely been climbing those bridges since the day they were built. But in terms of recent growth, you could probably chart the growth and it would follow the exact line of growth of Instagram."

It's where we found Lisa A.M., otherwise known as @amusemymuse, a little more than two years ago. Lisa's a mother of two in her mid-30s who, at the time and now, sported one of the more scenic and badass IG accounts in Cleveland. She started the feed about two years before that, and after the climber, who has a background in ballet and yoga, posted awe-inspiring pics from the tops of bridges, she started getting pings from others. She traveled to Chicago and Detroit and found a scene that didn't really exist at the time in Cleveland, at least not semi-publicly.

"The big thing in Chicago is rooftopping," she explained to us at the time for an interview for Scene's People issue. "Everybody's chasing rooftops there. Coming home to Cleveland, I was like, 'Why isn't there anybody here doing this kind of stuff?'"

She ran Instagram meetups which mainly drew people interested in photography and urban exploration, two hobbies that have a natural overlap.

"Instagram has literally changed my life," she told us back then. "It's weird to say that about an app on my phone, but it's connected me to so many people around the world. I was always into adventure and just living, and then I kind of lost that at some point along the way. But last year, meeting all those people in Detroit and getting out to explore abandoned buildings, and then meeting all those people in Chicago — it just kind of reminded me how much I love getting out, seeing what's out there. It's inspired me to get out here, to see what's here and dig deeper, finding the hidden side of Cleveland." 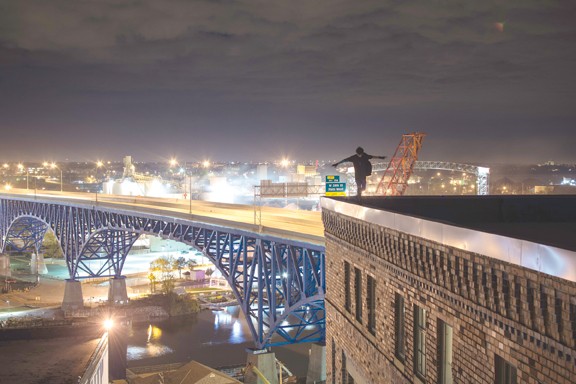 Lisa is kind of the central figure in the community, which counts somewhere between 15 and 30 regular climbers in that loose definition. When Inthavong, who besides working at H&M takes photos of various events around town, first got the bug, it was because of Lisa's feed, and an Instagram meetup is where they first met. The same goes for Tim Long (@timothyplong), another climber/photographer, and Pierson Trimarchi (@pierson_), a 26-year-old mechanical engineer and photographer.

"I started following Lisa on Instagram," says Long. "I went to a couple meetups and met her in person and just went out a few times, taking photos. It felt like something that was unique. They're a very private, close-knit group in terms of who they hang out with. It's almost like being accepted into this exclusive clique."

"It's a tight group," says Trimarchi. "You have to kind of know people who do it. You can't just ask. So I went to the meetups and started from there. I knew Kevin from Instagram and whatnot, but I didn't meet him intentionally. I was climbing early in the summer and I was on top of the bridge that connects Whiskey Island to the east bank of the Flats late at night. I was by myself, alone for a good 20 minutes. Then I see these two black figures descending from one of the tresses. We didn't get close enough to talk to each other and I had no idea who it was, but I posted one of the photos the next day and Kevin commented, 'Oh, you're the guy I saw up there!" And then we started exploring and climbing together."

There's an affinity there that binds them together, but also a host of motivations that bring them there in the first place.

"I've always loved heights. I've always been a climber," Lisa told us back when we first talked to her in 2014. "If you ask my parents, they'll tell you I've been climbing since before I could walk. It's a lifelong obsession: Anything climbable, I'm up there."

When we caught up with her this month, she elaborated a bit. "For me, it is a lifelong obsession with heights, as well as a curiosity, love, and respect for history and architecture. I thrive on challenges and believe the research and discovery process is part of the adventure."

The anonymous climber mentioned earlier echoes that exploration sentiment. "I could say that I was exploring and climbing things that I shouldn't have been since I was in grade school — drain tunnels, the building at the park, the neighbor's garage. I was a dumb kid, we were all dumb kids. You get in trouble. You wouldn't know people were doing it before, because no one was taking pictures and posting them on Facebook. If there were photos, they were maybe on Flickr, but Flickr really was by and for photographers."

And most of these climbers are photographers either from the start or by virtue of wanting to capture what they see.

"I was looking at it more from a photography perspective, views that no one else has access to," says Trimarchi. "You see the same pictures of the skyline over and over and you can only make it so nice. Climbing roofs and bridges, you get views of the city that no one else gets. I like it for that respect. I have no real fear of heights. I just like being able to experience the views; it's peaceful and secluded and kind of only for you."

The mundane yet extensive documentation of the Cleveland skyline is something you're probably familiar with. There are only so many buildings, so many vantage points. Drive by and through the city enough and it becomes white noise. Walk around downtown and it can only present itself in so many variations: How many identical pictures of the Terminal Tower have you seen on IG? It's boring as a viewer. Imagine how boring it is as a photographer.

"For me it started as getting a cool angle to document our city," says Tim Long. "We've seen shots from Edgewater and the east side and here you have these people who want a different angle, one above the city. You're part of it. You can see an alley that maybe not everyone else sees. We want to document things that we think are important. There's buildings that no one really paid attention to until this community took notice of those rooftops and you see what you can only see when you're on top of it."

The view is certainly unique, which is why the snaps get attention. The buildings and bridges, the crosses and tresses and reflections, they are integral parts of the composition. So too is the body, which when perched at the top — the very top — of say, the Detroit-Superior Bridge or seated on the ledge of a 15-story building, legs dangling off the edge, becomes startling. A prop. A reason, beyond the high technical quality, that the pictures stand out.