With the Sea and Cake. Wednesday, October 3, at the Beachland. 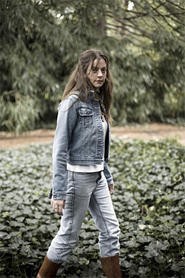 Espers' ornate folk has always sounded like the music of forest nymphs: otherwordly voices hovering over meadows of lacy guitars and moody drones. Soft, quiet, but intense, it acts like an opiate, slipping into the bloodstream and drowning the senses in dreamy reflection.

Singer and guitarist Meg Baird refers to her band's aesthetic as the "superhuman approach." It's something she ditched when recording Dear Companion, her solo debut, released on Drag City last May. "The record has different tonal qualities -- more vulnerability, a greater human quality," explains Baird, taking my call from her home in Philadelphia.

That "human quality" is key. With Espers, Baird's delicate voice sounds disembodied -- "reflections of a shadow," to quote David Crosby. But on the eight covers and two originals that make up Dear Companion, Baird turns mortal. She's now an American woman -- paying bills, finding her way, and feeling pain along with the rest of us. "Riverhouse in Tinicum," for example, meditates on a day trip to the Pennsylvania countryside. It's gorgeous, but "You know you'll never live there," she says, laughing at the irony of the high-priced pastoral life.

In person, Baird resembles the kind of folkie babe who's down for smoking a joint and spinning Zeppelin's "Going to California." So it comes as no surprise that of the covers, which are split between traditional folk and modern singer-songwriter fare, she's most human on the latter, especially the ballad "All I Ever Wanted."

"It has this kind of sad, New York feeling -- almost like a Velvets quality," she says of the tune, originally written and performed by New Riders of the Purple Sage, who hung out with the Dead in the early '70s. "It's a weird East Coast melancholy from a West Coast band."

Dear Companion, in general, is a fairly sad statement. But it's also the start of a promising solo career. -- Justin F. Farrar