Brooks's Producers stormed Broadway. Now it's a road-show blitzkrieg, too. 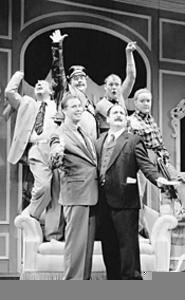 Half a century ago, Mel Brooks honed his unique style of Yiddish-inflected parody with his tenure as a writer on Sid Caesar's Your Show of Shows. In subsequent years, his classic work, ranging from Blazing Saddles -- recall the cowpokes farting around the campfire -- to Young Frankenstein, demonstrated a flair for anarchy rooted in pop nostalgia. Then, maybe sometime around the release of Spaceballs, Brooks's hyperactive vulgarity grew tiresome to the general public. After the mediocre box-office take of 1991's underrated Life Stinks, he was written off like someone's embarrassing grandfather still trying to crack up the local Kiwanis potluck.

So when the trades leaked the news that Brooks was adapting his still-beloved 1968 cult classic, The Producers, to the musical stage, reaction ranged from cynicism to apprehension -- especially since The Rocky Horror Picture Show had long since cornered the market on transvestites and fascists with a penchant for song and dance. But Brooks surprised everybody. His 33-year-old ode to theatrical skullduggery turned out to be a much-needed antidote to 20 years of lumbering self-conscious Broadway weltschmertz, from Cats to Miss Saigon.

With the wise guidance of co-author Thomas Meehan (of Annie fame), Brooks softened the subversive edges while vastly improving the structure of his original movie. He sweetened the tortured camaraderie between its central shysters -- hack theatrical producer Max Bialystock and his hapless accountant, Leo Bloom -- and transformed their get-rich-quick swindle from just a self-destructive race to Sing Sing into a platonic romance of wish-fulfillment. And, maybe in an effort to please the ladies at Sunday matinees, the original's bubble-headed Swedish nympho has traded in her bikini for that proverbial heart of gold.

The result was one of the most successful debuts in Broadway musical history, which has played to sold-out houses (at $100-a-pop prices, no less) and garnered a record 12 Tony Awards.

The film was a grotesque rhapsody, all psychedelic hues and frightening close-ups of gargoyles: Gene Wilder's peerless ferret hysteria, Zero Mostel's popping peepers and porcine mug dripping sweat. Thanks to the inspired machinations of director/choreographer Susan Stroman, a 2000 Tony winner for Contact, the show's madcap shenanigans have been upgraded and glamorized with a Metro-Goldwyn-Mayer sheen. With its continuous stream of inside-the-biz references and tongue-in-cheek fantasy sequences, it is now reminiscent of Singin' in the Rain. And the score, while shamefully derivative of virtually every major stage composer, from Jerry Herman and Irving Berlin to Cole Porter and Rodgers & Hart, still manages to be a pleasing pastiche.

If all tours were of this caliber, the only reason to fly to New York would be for the corned beef. In every detail, from the leading ladies' falsies to the individual talents involved, the Allen Theatre production not only equals but improves on many aspects of its Broadway progenitor. Lewis J. Stadlen, with his drooping mustache and basset-hound demeanor, commands the stage as though he were a lost Marx brother. His performance is pure quicksilver in its Jimmy Durante inflections, Jack Benny timing, and Mel Blanc animation. As his cohort in chicanery, Don Stephenson's Bloom is in every way his match and soulmate. He embodies the innocent twit with P.G. Wodehouse perfection.

Most exciting yet, there is at least one moment that rises truly to the ranks of divine inspiration. When Lee Roy Reams's mad queen of a Führer plaintively sits down on the stage, his legs dangling off the apron, tossing back his bang, he tenderly mouths "I love you" to his enraptured fans. For a breathtaking instant, his Hitler morphs into the Judy Garland of A Star Is Born. It's an image to file with a playgoer's memory scrapbook between Channing's Dolly and Merman's Mama Rose.