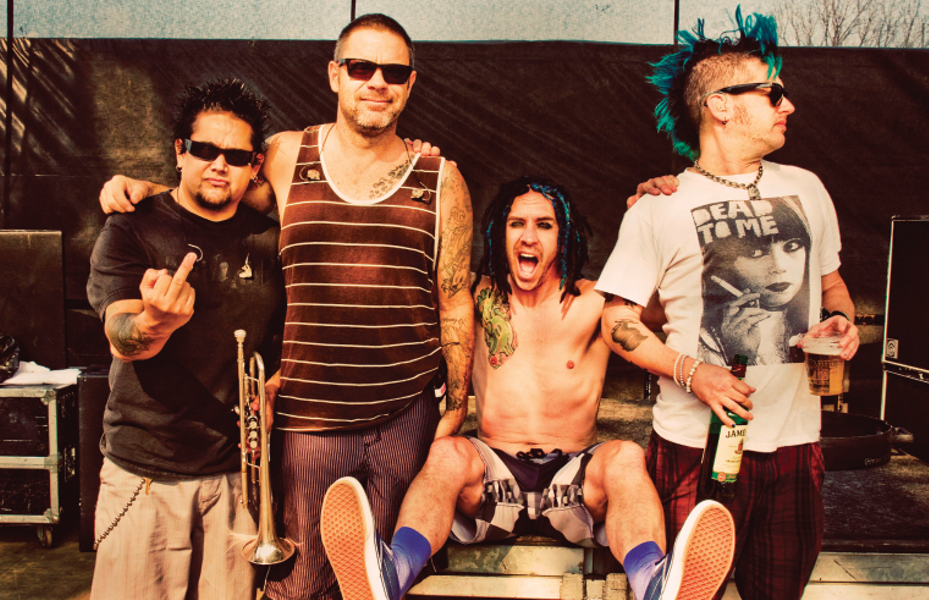 NOFX, Off with Their Heads, The Implants

"It's funny," he says via phone from San Francisco. "I remember thinking our guitar player should really buy a guitar amp. I didn't know anyone in the band. They just called me because they heard I played bass. It was weird showing up not knowing anyone. I went to see [the punk band] Code of Honor later that night. I didn't even think we'd actually play a show. But me and [guitarist] Eric Melvin started hanging out right away. We wouldn't practice, but just skateboard."

Mike recalls that the band wrote two songs during that initial session. Not bad for guys who barely knew how to play their instruments. Inspired by L.A. bands such as Bad Religion and the Dickies, the guys adopted a more melodic sound. They would become the quintessential melodic hardcore band and would eventually influence acts like Blink-182. While the band did become a household name, at least in punk rock circles, it wasn't easy.

"It took us quite a while," Mike says, who started up Fat Wreck Chords in 1990. "I always tell new bands that want something to happen that it took us eight years before anybody liked us. These bands are talking about a year or two. These new bands are like, 'Shit didn't happen for us. We're getting new members and changing our name.' I'm like, 'You've been around for 14 months. What the fuck?' The difference is that these bands want to get popular. The goal is to be a rock star. Our goal was to play a party and maybe get laid. That's the biggest difference between punk bands these days and those days. The motivation is totally different."

Things certainly shifted when Nirvana broke. While they weren't necessarily a punk band, Nirvana proved that raw rock 'n' roll could result in platinum album sales, something that bands like NOFX didn't think was possible.

"In the '80s, nobody could make a living," recalls Mike. "There were two moments I remember as far as record sales go. I remember this band called Verbal Assault. They sold 10,000 records. This was like '88. We were blown away that you could sell 10,000 records. Bad Religion sold 12,000 of Suffer the year it came out. We were blown away by that. That was about the number that Fugazi could do. If you could do 10,000, you were kings. What does that mean? You make no money and maybe draw 500 people at shows and sell out CBGBs. That was the big goal. Nirvana was the first band that could play a whole song that was three chords and it was fast and angry and the lyrics didn't make any sense and it worked."

In the wake of Nirvana's success, punk bands such as Green Day and the Offspring broke big and signed record deals with major labels. The majors courted NOFX then too. But after one meeting with Hollywood Records, the guys decided to keep doing things on their own, and they haven't entertained the notion of signing a major record label deal since.

"They told us that if we took a deal with Epitaph, we'd be second fiddle to the Offspring our whole lives," Mike says of the band's meeting with Hollywood. "We were like, 'We're better than Offspring; they just sell more records. Fuck you.' The Offspring went that route and we took our route. They sold more records but who the fuck cares? We got paid a good royalty and got popular. We do it ourselves now. Right now, we have done seven records on Fat Wreck Chords and eight on Epitaph. I would never switch careers with the Offspring. No fucking way."

Discouraged that the band was often categorized as pop-punk, Mike even stopped doing interviews for several years.

"It was always the same thing," he says of the interviews he did. "It was about what did we think about riding the pop-punk wave. No one asked any good questions. I was just over it. We weren't using the newspapers or magazines to spread the word about our band. We didn't need the press. They were using us. I started again when I was trying to get John Kerry in office. I wanted to start doing interviews for a purpose. A lot of good that did."

He stll bristles if you call the band pop-punk.

"We're not pop-punk whatsoever," he says. "We have melody. The term that was coined in the '80s and '90s was melodic hardcore. We're fast hardcore. Pop-punk was Green Day. Lyrically, pop music is bubble gum lyrics. We have nothing to do with that. We have socially offensive and political lyrics. I'm not going to sing a song about a girl. I sing songs about two girls but not one."

While Mike says the band doesn't have anything special planned to mark its 30th anniversary, the band's been plenty active. Its latest single, the hard-driving "Stoke Extinguisher," is the title track on a terrific new EP that features a cover of "The Shortest Pier," a tune on the tribute The Songs of Tony Sly. Mike put together the tribute to the late Sly, frontman for punk act No Use for a Name, and it features acts such as Rise Against, Bad Religion and Pennywise. It's a testament not only to Sly's talent but also to Mike's rep in the punk rock community.

"I put the comp together because even though No Use for a Name had sold shitloads of records, years had gone by since they sold lots of records," he says. "Their big records were sold in the '90s. His solo albums only sold 10 or 20,000. 12 Song Program is the best album I've ever put out. I wanted the world to know that we just lost a great artist. I wanted people to hear his songs. I called up a lot of bands and asked them to do his solo songs. People responded in the same way I hoped they would and didn't know he had so many great songs. Now, more people will hear this than ever heard his solo stuff. It was nice to call the bands. Most of the time, I picked the songs too. I didn't force it down anyone's throat."

Singer-songwriter Karina Denike opens the album with a subdued rendition of "Biggest Lie," a song from the last No Use for a Name album, Record of the Year.

"Karina picked that one on her own," says Mike. "I was like, 'Really?' It's a really fast hardcore song. She made it so amazing. I think it's the perfect opener. I told her I was opening the record with her. I know her name isn't as big as Rise Against, but it's all about the record."

Bands don't often last one year, let alone 30. So what's been the key to the group's survival?

"We just got lucky," says Mike, who adds that the band is working on a book about its history. "We have a good bunch of dudes and there are never any arguments or fights. I write the songs and there's no argument there. That's what usually breaks up bands. Everyone else isn't concerned with writing songs. We feel fortunate we get to do this for a living."