Friday, November 2, at the Grog Shop. 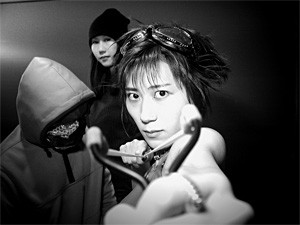 Melt-Banana is hugely responsible for the reputation that Japanese bands have for their live shows going way over the top. After seeing this group in concert, it becomes difficult to accept anything less than total hair-raising insanity from anybody else onstage. While these noise punks have been together and steadily releasing albums, cassettes, and seven-inches since 1992, their legend was built on nonstop touring. Singer Yasuko O wails like a cartoon character from Planet Z, while guitarist Ichirou Agata drops more riffs than 10,000 Jimmy Pages. Agata also wrangles previously inconceivable noises from his guitar — lung-popping whip-its that are amplified to permanently damaging noise levels. Melt-Banana's latest album, Bambi's Dilemma, came out in April. While the howling scrape of its earlier records has been cleaned up a bit, Melt-Banana shows no backing off from its dedication to noise, punk, and noise punk. If anything, the friendlier sound makes listening to its frenetic attack a little less exhausting. Just don't expect any of that newfound gloss to make its way onstage.