MENACE IN THE WOODS 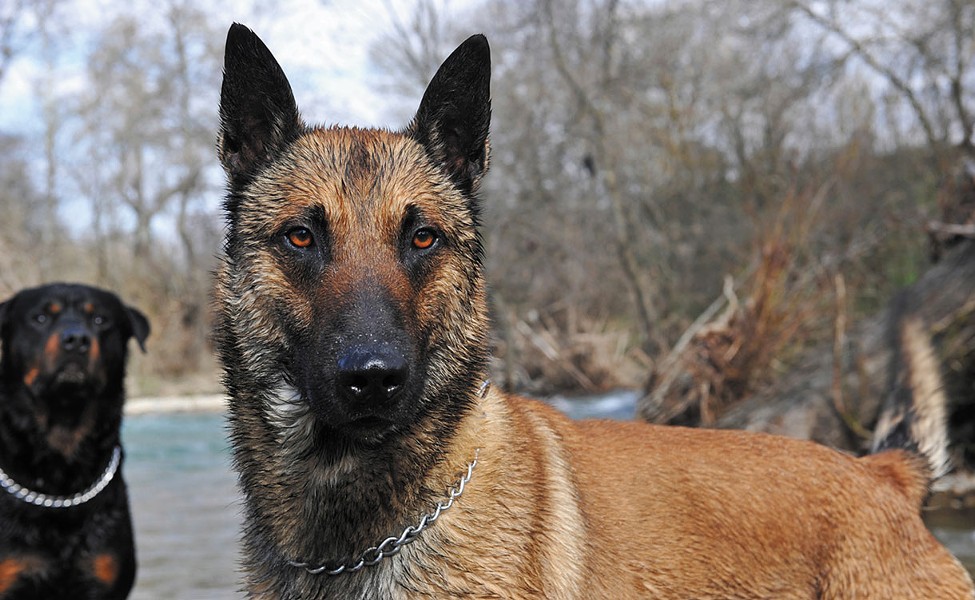 It was around 2:30 on a Friday night in May when Rick Bahry let Jersey Girl out into the backyard of his home in Akron's Kenmore neighborhood.

As he waited on the back porch for his brown and white Sheltie to return, Bahry heard an odd noise in the darkness that sounded like a bunch of kids laughing. He assumed it was teenagers invading his swimming pool, which sits 70 feet behind the house. He peered at the pool but saw nobody. Then the devilish sound grew louder, and his dog wasn't responding.

Bahry took a second glance and saw the source of the commotion: Six mangy dogs had descended on Jersey Girl, and they were ripping her to pieces.

"Have you ever seen one of those nature shows where hyenas are attacking their prey?" says Bahry. "That's what it sounded like. She was on her back, being mauled. They were basically eating her. Another 15, 20 seconds, she would have been past the point of them [being able to fix] her."

The pack stood its ground until Bahry was only ten feet away. Then it scurried into the darkness toward the woods behind his log-cabin-style house. He scooped the bloody dog into his arms and took her to an animal hospital. A chunk of her rear right leg was missing. The dog's crotch had been torn open, leaving a wound that looked like a mound of spaghetti.

Akron Animal Control suspects the dogs have been on the prowl for more than a year, from Kenmore's Nesmith Lake Boulevard to the Castle Homes area a mile to the west, on the other side of Lake Nesmith. The attack on Jersey Girl was the first reported, but it wouldn't be the last.

"I think it's crazy," says Joe Maxim, a neighbor of Bahry's who fears for the safety of his young child. He's seen the dogs come and go day and night. "It's ridiculous. That's too dangerous."

On the edge of Akron and Coventry, this part of Kenmore is a hilly suburban neighborhood nestled between Route 224 and the Ohio & Erie Canal. The big yards have tall, blossoming shrubbery and old trees thicker than barrels. A plastic preschool basketball hoop stands in a driveway, with a toy car sitting in one nearby yard and a sandbox in another.

Until this summer, the most invasive wildlife were the deer that come in from the adjacent 100-acre wood to munch flowers. Now residents suspect the woods have become a refuge for the dogs too.

A few blocks down from Bahry, Denny Rowland has also seen the pack. He worries his own dog could be its next victim; when he and his wife let it outside, they watch carefully and bring it back in immediately.

Rowland has guns locked and loaded, and says he's ready to thin the herd. He drew a good bead on one of them a few weeks back, but they were too close to a walking path to get off a safe shot. Rowland says the dogs all have a similar look, though some are black and some are light. He guesses the adults weigh 50 pounds, including a menacing black pack leader. To his eye, they seem to be a Labrador-hound mix, with pointy ears and long, full, curly tails. One of Bahry's neighbors thinks he saw a collar on one of them, suggesting it was abandoned, possibly orphaned by a foreclosure.

"The neighbors thought they might be coyotes," says Rowland. "But I never saw coyotes look like this."

Questions about the dogs are met with polite ambivalence by authorities in Akron, where money woes have a way of sliding renegade wildlife a notch down on the priority meter. According to Akron spokesman John Eaton, the city has just two wardens to field all animal complaints. They do what they can, but he admits there's "not enough manpower."

Akron Animal Control Warden Don Miller, who lives in the neighborhood, says the pack is an anomaly.

"There are a couple areas in Akron where we do have issues with wild dogs or dogs that have turned feral from being turned loose," Miller says. "In my 25 years [in animal control], we've had this situation half a dozen times. We've never had a pack of dogs attack people."

Just two weeks after the attack on Jersey Girl, the dogs returned to Bahry's home, this time during the day. Bahry wasn't home, but his girlfriend, Meghan Redle, was. Two neighborhood kids were playing at the house, but luckily hadn't made it past the back porch when six dogs appeared. They tried to scare them away by shouting, but the canines stood firm. They finally appeared to retreat, but were later found hiding behind the pool.

"The girls were screaming," says Redle. "One dog sat on the corner of Rick's property and barked at the girls and I, almost like a dog does when someone or something comes into their territory. Seeing that made me realize that these dogs are not afraid of humans and are becoming territorial over the land."

A few weeks later, Akron police responded when several of the animals chased a pre-teen girl who was riding her bike around the neighborhood. She outpedaled them and escaped unscathed, but the girl — once a fixture on neighborhood streets — has been scarce since.

Miller has received reports of the dogs killing groundhogs and baby ducks, and neighbors say cats are getting mauled too. Bahry says neighbors have spotted the dogs lurking under his pool deck, on the side opposite his house.

Other neighbors say dogs roam the streets in the early morning and lounge in driveways in afternoons. The pack has been spotted as recently as late July. As summer winds down, residents are growing weary of needing an escape plan every time they go outside.

But the city doesn't have the money to launch an expensive stakeout of the neighborhood, and its wardens aren't even equipped with tranquilizer guns. In the weeks after the attack on Bahry's dog, Akron partnered with the county to expand the search, covering miles of nearby territory.

Several traps were set, including spring-loaded devices baited with cheeseburgers and dog food. So far, they've snagged a puppy and one larger dog in neighboring Coventry Township; traps set on Bahry's property have turned up empty. The captured animals were deemed feral and euthanized. Miller calls the operation a relative success: Once half of any pack has been caught, he says, the rest move on or wise up.

But until the city receives more reports and better intelligence, the pack cannot be contained. "We're at our wit's end," says city spokesman Eaton.

Jersey Girl has six-inch scars and a little limp, but she survived her May ordeal. Bahry, meanwhile, is resigned to a $5,000 vet bill and the feeling he can't step into his own back yard.