Catwoman prompts both purrs and hisses. 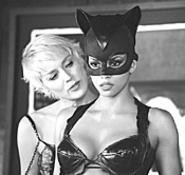 Without risking much critical credibility, one can say that Catwoman succeeds on its own feline terms. Much like a cat, the movie is a superfluous gob of fluff, with an attitude ranging from idiotic to nasty. It's a sleek and self-absorbed animal, adoring itself so ardently that those of feebler psyche may also deem it worthy of adoration. Its antics will amuse you and drop your IQ about 40 points while it deigns to share your company; as soon as it departs, you're likely to regain most of your cognitive abilities and forget it was ever there.

This appraisal does not factor in the severe allergy-sufferers known as comic-book geeks, who may sneeze heartily at this incarnation of the 64-year-old character simply because she's no longer the expected strokable fantasy of the average heterosexual teenage boy. Which is OK. As personified by Halle Berry, Catwoman is now entirely about "empowerment" -- if indeed that term means pouncing capriciously through an urban fantasyland, backed by a musical score that sounds exactly like Whitney Houston enjoying intermittent orgasms to accompaniment by Rammstein. Subtract any reference to Batman, add in today's requisite leather straps and female whoop-ass, et voilà: It's a bane for Bob Kane purists and a few fun kicks for curious pedestrians.

Of course, personifying the legend of Catwoman presents certain challenges. The catsuits of yore have been stretched by some mighty hips, including those of Julie Newmar, Lee Meriwether, Eartha Kitt, and Michelle Pfeiffer (who gets a quick nod here). Strangely, the ever-appealing Sean Young did not land the coveted role despite extremely dedicated attempts, but the dancer-actress best epitomizes the character's slinky spirit, eliciting appreciative purrs in other roles with no need of a silly costume. Speaking of which, now we have Berry getting tarted up like a test mannequin in Gay Windowdressing 101, her very wardrobe a testament to renewed boldness.

Berry first appears as an implausibly frumpy and mousy advertising designer named Patience Philips, who is absolutely pathetic at playing "shy" but very successful at being a passive loser. Inexplicably, she risks her life to save an annoying exotic cat, attracts a pugnacious cop named Tom Lone (Benjamin Bratt, much more paycheck than Piñero), and evokes the wrath of her boss, a fascistic cosmetics kingpin named George Hedare (leering Lambert Wilson, miles from his smiles in Pas Sur La Bouche). The philandering Hedare commands his empire with his chilly wife, Laurel (Sharon Stone, literally living up to her name), and their products are definitely not cruelty-free. When hapless Patience accidentally learns their toxic secrets, it sets off a chain of events that lead to her living out a feline rehash of the Spider-Man origin story, with a whole lot more rump-shaking.

There's plenty to like about Catwoman, from its noble attempt to weave in the mythology of Egyptian cat-goddess Bast to its guilelessly obvious raison d'être, which is to deliver fantasy fulfillment for urban ladies wishing to slash up the annoying dawgz in their lives -- or at least obliterate them at hoops. Producer Denise DiNovi (Batman Returns, Practical Magic) is a crackerjack with a unique guiding sensibility, and director Pitof (Vidocq) delivers engagingly eerie urban funk with the help of gifted cinematographer Thierry Arbogast (The Fifth Element). There's even a fleeting attempt to explain the duality of femininity; it is nice that they tried.

Plenty of fodder also emerges for the sharpening of one's claws: Apart from Berry's character ordering a cleverly catty White Russian ("no ice, hold the vodka, hold the Kahlua"), the dialogue is miserably flat, and the screenplay is but a worn-out scratching post of gender-swapped superhero clichés. Patience's cat-obsessed mentor (Frances Conroy) looks like Rodney Dangerfield in drag (and her whine about "male academia" is a drag), while the super-svelte heroine's supposedly audience-relatable homegirl (Alex Borstein) is a meddlesome chunko, who sincerely believes that everything she says is fabulously clever -- in other words, a crashing bore with wayyy too much screen time. Any fun resulting from Catwoman slurping sushi or beating up baddies via Capoeira suffers by contrast.

Consider it a draw. You'll get pussy galore here, but you'll also have to stomach a heroine whose only real concern is herself and whose only mission is to save the world from the devastating horror of bad skin cream -- shipping at midnight! The movie's overall effect is similar to that of attending a wild rave: There's a sense of elated emptiness with a chaser of total puzzlement over what on earth that was all about. Of this revised Catwoman character, supernaturally imbued with real feline qualities, the imaginative viewer will ask further questions: Does her mouth stink? Will she torture far sweeter creatures, before mercilessly slaughtering them? Retch a lot? Foul the sandbox? Bathe . . . ever again? These and other pressing concerns await clarification in the Catwoman sequel. If there is one.