Some advice on surviving the Sounds of the Underground fest. 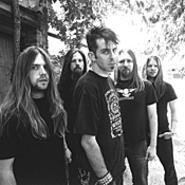 Heavy metal has long been defined by agony: tortured vocals, battering-ram guitar, cirrhosis of the liver. But it isn't until the summer concert season that metal's misery becomes fully realized -- sunstrokes, sprained necks, and all. Anyone who's ever attempted to drink beer and rock out beneath the blazing sun for a full day can attest to just how draining an experience it can be -- think boot camp with Budweiser.

This Tuesday at Scene Pavilion, metalheads will have their mettle tested once again by the inaugural Sounds of the Underground tour. With a lead-heavy bill featuring everyone from hardcore brutes (Madball) and thrash favorites (Strapping Young Lad) to heavy-metal heshers (High on Fire) and Cleveland's finest (Chimaira), the show is sure to be the highlight of the summer for anyone with tattooed knuckles.

In order to prepare headbangers for what is sure to be an endurance test, we sought advice on surviving the all-day metal fest from a few bands on the tour -- most of whom are veterans of Ozzfest, so they know about the rigors of playing in the summer sun. Grab the suntan lotion, cut the sleeves off that Pantera T-shirt, and let's hit it.

How big an adjustment is it to go from touring clubs at night to playing outdoors during the day?

Ken Susi, Unearth guitarist: I'll be honest with you, there's something of a rhythm to be found. For Ozzfest, we would think about how we like to play at a club -- have a few drinks, get used to playing a little burnt up -- and just go for it. Dudes were absolutely partying just to prepare themselves to play at 10 o'clock in the morning. It's hard to wake up at nine in the morning and start drinking shots of Jäger, but a lot of dudes did. You turn into an alcoholic, basically.

Randy Blythe, Lamb of God singer: It's a hard adjustment, I'm not even bullshitting you. We're used to playing in the dark. The fact that it's light alone is weird at first. You're like, Whoa, it's really bright out here. At 2:30 in the afternoon, normally we're just waking up.

What's the best way to beat the heat?

Keith Buckley, Everytime I Die singer: You can't even think about it, you can't even give in to it. By the end of the day, your whole body just shuts down before you want it to, and you don't know where it comes from. You definitely just gotta follow the sun and realize what time of day it is at all times and pace yourself, because it's better than being passed out on the bus by 5:30 in the afternoon.

Have there been moments when you've just been overwhelmed by the sun?

Blythe: Absolutely, man. I remember one show in Tennessee, it was the hottest show on Ozzfest, it was fucking ridiculous. I remember getting offstage and just being like, my God, I am going to die here. Onstage that day, I was in the middle of some scream, and I was trying to hold it out as long as I could, and I was just like, fuck it. I gotta cut this one short, or else I'm gonna pass out. You get dizzy, ya know.

What's the best part about playing during the day?

Mark Hunter, Chimaira singer: It's totally a different vibe -- you can kind of see everybody, for a change. Maybe at a club you can only see the first few rows of people or something, but this is more in your face. It's just exciting, because you can see people from as far back as they're standing, and you can almost see the reactions on their faces. You can really get a good sense of how you're connecting with the audience.

How are you preparing yourself for the tour?

Doug Sabolik, A Life Once Lost guitarist: I'm the kind of guy who likes to have a few beers and smoke a few joints before hitting the stage, so doing this is going to be hard. But there's a Jäger tent on this tour, so when you wake up, you can get that quick wake-up shot or two. We gotta be there at 9 a.m. every morning, and the show doesn't end until [midnight], so we're going to be driving overnight, every fuckin' night. We're just going to do a lot of fuckin' speed.

What advice would you give to fans on making it through the day?

Sabolik: To get through the day, you need to drink a lot, man. You need to smoke a lot and hit that fuckin' nitrous tank up. My body will probably feel three years older after this.

Hunter: I would suggest doing a lot of heavy speed, just to keep up with all the bands. I've never endorsed any kind of drug in my life, but I would definitely think you need to be wired on something to be able to keep up.

Blythe: Don't start drinking at nine in the morning and expect to last the whole day. I saw kids getting carried out every single day on Ozzfest from heat exhaustion, just destroyed, just sitting there panting, dozens of them. Tell the kids they gotta drink lots of water.