With the Stills and Searay. Tuesday, May 25, at the Grog Shop. 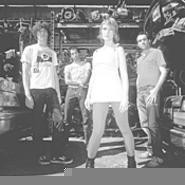 Any one-hit wonder or label-jilted band can tell you that the vicissitudes of the music industry work in mysterious ways. Just ask the Los Angeles quartet Metric, which found its space-age synthpop tune "Grow Up and Blow Away" featured prominently in a Polaroid commercial, even as its Stephen Hague-produced debut of the same name suffered in release-schedule limbo. The nomadic band -- which has also spent time in Brooklyn, London, and Toronto, and boasts two members with ties to the Canadian art-school commune Broken Social Scene -- eventually ditched the anemic yuppie-bar frostiness of those early sessions for guitar-buzzed electropop when recording its second disc, Old World Underground, Where Are You Now? Bursting with taut indie rock, the album shines, thanks to vocalist Emily Haines's coy disaffection and self-assured sauciness. Unlike similarly synth-fried bands, however, Metric's live shows are more vintage T-shirt than skinny tie: New songs played during recent tours are art-school-damaged and punkish.