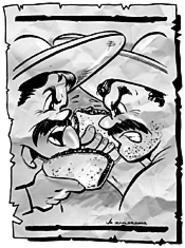 To many Clevelanders, La Voz Hispaña may as well be written in Sanskrit. But when it comes to restaurant menus, most of us here on the North Coast speak Spanish fluently. Whether it's tostadas or tamales, flautas or fajitas, the vocabulary of Mexican dining has become our common tongue and has made south-of-the-border fare some of the most popular in the region, right up there with pizza and Chinese takeout.

That very popularity, though, has spawned some fierce battles, with fans of one taqueria hotly debating the merits of their favorite refried beans and salsa with equally opinionated fans of another. And though we're not looking to make more trouble, ever since El Rodeo opened in North Olmsted in September, within walking distance of the venerable Nuevo Acapulco, a showdown between these two well-matched opponents has been inevitable. After all, inquiring diners want to know: Which restaurant serves the best margarita? Which kitchen makes the best flan? Curious, we rounded up an extra-large posse on a recent Saturday night and spent a single cilantro-infused evening evaluating the setting, service, and of course, the food at both spots, consuming what seemed like gallons of frozen margaritas, quarts of freshly brewed coffee, and massive servings of chips, salsa, guacamole, chicken mole, steak fajitas, vegetarian enchiladas, fried ice cream, and flan. And here are our verdicts:

Tale of the Tape

Planted within spitting distance of Lorain Road and connected by way of a low awning to a nondescript budget motel, Nuevo Acapulco's curb appeal is little to none. But once inside, guests are enveloped in a bright, airy, colorful space filled with lush houseplants, ornate inlaid-wood wall art, and three larger-than-life murals of a radiant Mexican countryside. Cheerfully kitschy parrots and cockatoos (papier-mâché, thankfully) peer down on diners from overhead perches, and small bouquets of silk flowers decorate each table. The menu is enormous, with choices ranging from the mundane (cheddar-cheese-topped nachos) to the elegant (Camarones al Mojo de Ajo), supplemented by a vegetarian listing, a kid's menu, and a short list of "all-American favorites" like burgers and charbroiled chicken. Prices are low, with only the rare entrée breaking the $13 mark, and our blowout meal for six, tax and tip included, came to a mere $70. As for service, staffers are almost obsessively friendly and accommodating -- appearing with pitchers of ice water, piles of paper napkins, and extra plates before guests even realize they need them.

In contrast to Nuevo Acapulco's plain brown wrapper, El Rodeo's home is in a handsome, freestanding faux hacienda, an eye-catching structure of white stucco, red brick, and terra-cotta tile. Inside, the decor is warm and uncluttered, with sherbet-colored walls, an inlaid floor, and a double line of arched cubbies, each holding a high-backed booth. Tabletops are covered with floral oilcloths and glass, place settings are bright Fiestaware, and margaritas are poured into festive goblets with stems of blown-glass cacti.

If anything, El Rodeo's menu is even larger than its neighbor's, with more combination plates, more "vegetarian" items (they're made with beans prepared with meat products), and a bigger kids' listing; and while there's no self-contained "American menu," unadventurous palates can surely get by on french fries and an order of chicken soft tacos. Portion sizes and price points are nearly identical to those at the competition; here, our six-person fiesta tallied up to a comparable $74. Service, however, was a weak point: While staffers were friendly, the language barrier often complicated communication. Even more frustrating, apparently inexperienced servers seemed unfazed by the sight of empty water glasses and chip baskets, and indifferent to our need for extra plates and napkins.

Like it spicy? Then the fresh, chunky table salsa at El Rodeo has your name on it. Almost daringly hot and peppery, with a double-punch of jalapeño and serrano chiles, the sauce made a heavy-hitting tag team with the restaurant's light, crisp corn chips, served warm with just a hint of salt. (At Nuevo Acapulco, the room-temperature chips were thicker and less flavorful, with a slightly greasy aftertaste.) The top-notch salsa and chips also brought out the best in the bar's frozen lime margaritas -- easy-sipping sweeties with a citrusy tang, served in those jazzy goblets. Not that we're complaining about the margaritas down the street at Nuevo: While the notes of citrus were less evident and the sweetness quotient seemed higher, our group wasted no time guzzling down a pitcher.

When it comes to guacamole, however, only Nuevo Acapulco gets the nod, and it's a subdued one at that. The thick, sturdy dip was freshly made, but it lacked oomph. And El Rodeo was even more disappointing: The thinner, almost sticky dip proved comparatively dull and lifeless.

Among main courses, the standout entrée was Nuevo Acapulco's Chicken en Mole, with bite-sized bits of tender, skinless breast meat in a thick, rich mole sauce, crafted from a blend of sesame seeds, almonds, chocolate, and mild chile peppers. In contrast, the chicken in El Rodeo's Mole Poblano was less tender and not as well trimmed, and the mole moved from bitter to peppery, with not much in between.

Neither spot cooked up exceptional steak fajitas, that sizzling dish of sliced beef, onions, tomatoes, and peppers. El Rodeo edged ahead with its juicy, deeply charred veggies and enticingly smoky flavor notes; on the other hand, a zesty side of pico de gallo spiced up the less aromatic version at Nuevo Acapulco. However, the sliced steak in both versions was tougher than it should have been.

For vegetarians, Nuevo Acapulco's Enchiladas de Verdura -- soft corn tortillas stuffed with a colorful mix of broccoli and cauliflower tips, zucchini, onion, and mushroom, and topped with green tomatillo sauce and cheese -- is hard to beat for full, fresh flavor. Our meat-averse companion also endorsed the vegan-friendly, cholesterol-free beans that are available here on request; on the other hand, the carnivores in the group gave big thumbs up to the restaurant's thick, buttery -- and yes, lard-loaded -- refried beans, bursting with deep, smoky flavor.

Six battling spoons made short work of the perfect flan at El Rodeo, a quiveringly smooth, dulce-de-leche-laced beauty that kicked the lumpy, overcooked version at Nuevo Acapulco to a distant second place. As for the other popular Mexican-restaurant dessert -- fried ice cream -- the chocolate- and whipped-cream-topped versions at both places were just too greasy to garner raves. But each restaurant brewed up a fine cuppa java, providing a bracing ending to a meal with at least some bold flavors.

Nuevo Acapulco and El Rodeo are similarly inexpensive and pleasant alternatives for casual family dining. If upstart El Rodeo gets kudos for its good looks, old-timer Nuevo Acapulco wins the service title. As for the food, intrepid diners who only crave "the champs" might well start out at El Rodeo, with margaritas, chips, and that macho salsa. Then it's down the street for chicken mole, vegetarian enchiladas, and those sturdy refried beans. Finally, for dessert, we'd have you jog back to El Rodeo for flan -- lots and lots of flan. And who knows? By the end of that workout, you just might be ready for some rope-a-dope yourself.