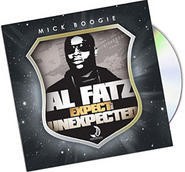 Al Fatz is the latest Cleveland rapper to ink a major label deal. This Mick Boogie-assisted mixtape is a teaser for Al's proper debut for Atlantic and features an MC whose obvious Biggie infatuation is given a new twist: Al breaks into the kind of Midwest swing that Nelly swiped from Bone Thugs.

However, parts of this mixtape are a slog. The hater-hating intro alone will have you checking your watch to make sure it's keeping time in minutes, not years. The LeBron anthem "Callin' All the Shots" is a crunk-inflected duet with Paul Wall that's as disappointingly sluggish as the Cavs' Finals performance. The definitive statement is Al's "Came Down," a monstrous combo of beat, chant, and insidious three-note piano riff. If there isn't more where that came from, MIMS will have company on the one-hit-wonders-of-2007 list.