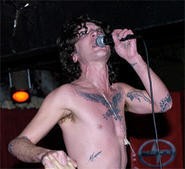 Mickey Avalon makes the Insane Clown Posse look like Public Enemy. Tattooed, shirtless, and made up like a sex doll, he's a nice Jewish kid turned junkie, truck-stop hustler, and rapper. The L.A. dreg would have made a great dirty New Yorker, back when "punk" referred to both music and part-time prostitutes. Artistically and spiritually, he's the bastard son of Dee Dee Ramone and the License to Ill-era Beastie Boys. And while his insidious self-titled debut might be the most indefensible rap album ever, sleazy tunes like "The Jane Fonda" and "My Dick" are -- despite a barrage of juvenile rhymes and phallic fixations -- so catchy that they're beyond bad; they're downright evil.