Artist's retrospective covers the things that matter most in his life and work. 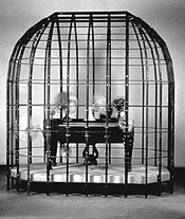 The mid-career retrospective calls for a curatorial high-wire act. The trick is to cast a judicious backward glance on the work that made an artist well-known without making it seem as though he's dead.

A new exhibit at the Cleveland Center for Contemporary Art called Malcolm Cochran: [Re]collection is a retrospective of one of Ohio's most well-known artists, and, as one views it, one is never in doubt that the person it honors is alive and that his creative energy still churns. Mundane materials like cow tails, vacuum cleaners, and storm windows show up frequently in the work on display but, though ephemerality and impermanence are the starting points of Cochran's art, there is a sense that he's always after an ideal.

However, this ideal seems to be either long gone, like the Arcadian landscapes in some of Thomas Cole's paintings (which inspired one of Cochran's public sculptures), or simply nonexistent (one thinks of the sculptor's minimal 1999 work called "Buffet of Memory," which consists of a group of enormous steel trays that rotate slowly, ceremoniously, on the gallery floor, but hold nothing -- suggesting, perhaps, the artist's struggle to locate an object that would be worthy of such lavish display). Cochran keeps on going, though.

There are few certainties in his universe, but the process of searching is enlivening, and one stands back in admiration when, during an exhibit spanning 20 years of work in sculpture and installation, an artist revisits the same territory, but is constantly able to find new topographical details and shades of feeling.

As a retrospective, this exhibit is unusually thorough. Along with eight major sculptural works, there is photographic documentation of several of Cochran's public sculptures and a selection of drawings and preparatory sketches that trace works from genesis to completion. Associate curator Kristin Chambers says that the show is "a reflection of the things that matter to Cochran most -- the people, places, and events that have made a lasting impact on his psyche," and this apt characterization suggests the existence of yet another layer to these proceedings.

This, after all, is not merely an exhibit of work that has been publicly displayed over the years; it also adds up to an artistic self-portrait. The numerous false starts, the sketches, with their notes in the margin, about whether such and such a material is available, and the pictures of source material provide a critical clue to Cochran's mindset as an artist: He has no interest in the romantic notion of art as a mysterious product that springs fully formed from the creator's head, as Athena sprang fully formed from Zeus's head. As the millennium draws to a close, Cochran's work reminds the viewer that technological progress hasn't made the process of giving form to one's personal experiences any easier.

One of Cochran's finest works is "Song Without Words (for Amy Beach)." Executed in 1987, it's like a five-line poem that nevertheless contains a lifetime's worth of wisdom. It's both concise and richly suggestive. The title refers to a short musical composition without a vocal line by the 19th-century American composer Amy Beach. Cochran's creation, which consists of a glass structure with sturdy steel scaffolding, recalls greenhouses and conservatories that house birds. Within this structure, he sets a melodeon (a kind of portable organ that was popular in American parlors during the 19th century), on top of which are placed a number of oscillating fans. The only sound is the whirring of the fans. The melodeon makes no music, and save for an opening at the top, this bar-like structure is closed off from the world.

Cochran has written eloquently of how the piece calls on the viewer to supply the music that is missing. Here is a carefully controlled environment (like a soundproof practice room) in which someone can make music to his heart's content without disturbance from the neighbors, and yet the whir of a fan is a poor substitute for the organized sounds in a song. He has also said that, in his view, the piece is about "our inability to express ourselves even in an ideal environment," but it is a sign of the work's power that this work can also be read as a visualization of a stifling, decidedly un-ideal environment. Perhaps, in this regard, Amy Beach is the key. She was on her way to a major career as a pianist until she married a noted physician, who persuaded her to end her career. She spent the next 25 years composing, but one wonders what she might have accomplished as a composer if her career as a pianist (and the day-to-day contact with music that such a life entails) had continued.

One person's ideal environment can be another person's prison. As in so much of Cochran's work, one is confronted with what one writer, in another context, has called "the relativity of perception."

Also boasting a highly personal approach to form and subject matter is a series of works that Cochran executed in 1996-'97, when he was teaching in the Netherlands. This series is composed of four separate works, but is meant to be viewed in tandem; Cochran called it his "Dutch Journal." Fittingly, the pieces commemorate not only a physical place, but the psychological resonances that this place had on a particular person (the use of the word "journal" in the title sends up red flags that this is unabashedly confessional work). For example, Cochran transforms rolls of paper towels into a ruffled Dutch collar commonly worn in the 16th century. Here, though, the collar has been grotesquely enlarged (it must have taken thousands of paper towels to construct it). Instead of thinking of the 16th-century Dutch who wore such collars, one thinks, instead, of those Colonial American punishment devices that called for the offender to be restrained at the neck. The Dutch collar is not a fashion statement here; it suggests that common items -- or, by extension, commonly held ideas unthinkingly adhered to -- can stifle creativity.

Other works in this series, such as the 240 pairs of wooden Dutch shoes -- many of which would fit Bigfoot, but hardly anyone else -- also play with notions of the grotesque. More importantly, perhaps, is the suggestion that there is strength in diversity. These shoes are noticeably different from one another, and this emphasizes that their hypothetical wearers are also suitably idiosyncratic. Anyhow, the cool craftsmanship on conspicuous display in this piece focuses the viewer's attention on the shoes and encourages speculation on what they might mean. This one is a close call, though: 480 wooden shoes that are not even good for walking must have a pretty strong reason for existing, and it's debatable whether this statement on conformity is sufficiently original to reward viewing effort. The Dutch collar work was grotesque, disturbing, and thought-provoking. This one is less so on all three counts.

If the Dutch Journal highlights the fact that Cochran's reputation is not merely regional, his regional pieces are some of the most deeply felt in the whole exhibit. Anyone who has traveled the Midwest and thought about the land and how it has changed as the century has worn on will take delight in these works. They are regional without being provincial. A fine case in point is "Ohio Chimney," a chimney structure made of individual bricks fashioned from cow hair and wax. A house has burned to the ground, but this fragile (yet strangely resilient) chimney remains. It looks as though it is charred, though. Cochran is again working the soil of memory and posing disturbing questions about what tends to last and what tends to wither away quickly. The important thing to note here is that the chimney doesn't survive because of its physical properties (wax and cow hair can't compete with fire). Rather, the chimney suggests images of home and hearth, and these might, in some sense, be impervious to disaster.

That is, perhaps, the enduring paradox of Malcolm Cochran's art until now (he's only 51). In pieces like "Song Without Words (for Amy Beach)" and "Buffet of Memory," he is skeptical and, perhaps, even pessimistic about the future of humanity and of the creative impulse, but works like "Ohio Chimney" bring everything back toward the center and suggest that all hope is not lost as we approach the millennium.

Charles Yannopoulos can be reached at cyannopoulos@clevescene.com.