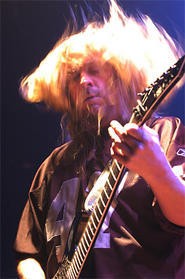 After establishing his musical group as one of the world's top providers of Halloween and haunted-house music, Midnight Syndicate founder Edward Douglas is set to take the next step into scary media. He'll direct a remake of the horror-suspense film The Dead Matter -- a tale of vampires, the occult, and the afterlife.

"It's horror at its core, but it's going to appeal to people who like a good supernatural story," says Douglas. "And we can promise people it's going to look good and be a good movie."

Douglas' Entity Productions will co-produce the film with Precinct 13, the production company of Hollywood special-effects legend Robert Kurtzman, a Crestline (near Mansfield) native who co-founded the Academy Award-winning KNB EFX group. Kurtzman's credits include From Dusk Till Dawn, Boogie Nights, and Bad Boys 2.

Co-written by Douglas, the movie is set to begin preproduction March 1. The film will shoot in Northeast Ohio this fall. The cast hasn't been announced, but the producers are in talks with two big-name horror actors.

Douglas co-founded Entity Productions in 1994 and produced a low-budget version of Dead Matter. In 1997, he founded Midnight Syndicate to score the film. Since then, he and Syndicate partner Gavin Goszka have concentrated on creating music for amusement parks and role-playing games. Midnight Syndicate will score the new Dead Matter and release a multidisc soundtrack.

"As I saw Midnight Syndicate start to build, I felt it could get us in position to get back into film production," says Douglas. "We'll be using Hollywood people, but we'll be using a lot of local talent too."

· Hatecore Inc. 's perpetually shifting lineup now has an opening for a bassist. Prospects can contact the thrash revivalists via www.MySpace.com/HatecoreInc, where they've posted the new track "Blame." Cole Martinez (Years of Fire, By Their Blood) produced.

· Audiblethread has finished recording its new album, Polar Shifts: Vibrations, produced by Cole Martinez. The disc is slated for March release. Demo versions of tracks are available at www.MySpace.com/Audiblethread. "It's rock music in the same genre of Taproot, Chevelle, 30 Seconds to Mars, etc.," says guitarist Eric Antonik. "We still carry on the melodic and ethereal nuances, but this is definitely bumped up in tempo." The band plays the Crossroads (153 East Cuyahoga Falls Avenue, Cuyahoga Falls) Friday, February 23.

· Ultralord is dead, but most members of the punk-metal sludge machine have regrouped as Necrodamus. Former King Firegoat singer Steve Barcus joins guitarists Scott Stearns and Corey Bing in the equally ugly sequel band. The group has already recorded an album. Abdullah's Jeff Shirilla engineered. The disc will feature Misfits and Cro-Mags covers, in addition to Integrity's "Die Hard," which Stearns wrote. Take a listen at www.MySpace.com/Necrodamus. Shirilla has replaced drummer Jason Corley in Bing's Fistula.

· Visit the C-Notes blog at www.clevescene.com/blogs for early concert announcements and links to free mixtape downloads from Injection XL and Mick Boogie and Little Brother.