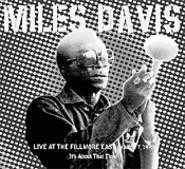 With Miles Davis working in overdrive, this great, previously unreleased double album captures two incendiary sets by one of the trumpet master's more amazing groups: Wayne Shorter on sax, Chick Corea on keyboards, Dave Holland on acoustic bass, Jack DeJohnette on drums, and Airto Moreira on percussion. It's the first official release by this astonishing assemblage, a transitional band Davis put together between the classic Shorter-shaped quintet of Filles de Kilimanjaro, the various configurations that made Bitches Brew so influential, and the group he recorded Black Beauty with only a month later. Like other live Davis albums of the '70s (they're all good and all different), this stresses long, competitive vamps based on such keystone tunes as "It's About That Time," "Masqualero," "Spanish Key," "The Theme," and "Willie Nelson."

Melody takes a backseat to thrust, volume, and excitement on both sets. They're so seamless and energetic that the very concept of highlight, not to mention solo, seems inappropriate. Davis bites down hard on his phrases, Shorter skirls and wails, DeJohnette and Moreira maintain a bottom so tight the nuances pop, and Corea has simply never played this freely. The imagination infusing Corea's work on "Masqualero," the first take of "It's About That Time" (on which Shorter works stratospheric soprano sax), and "Spanish Key" leads to keyboard pyrotechnics so impossibly fast and accurate, they challenge and thrill the listener eagerly trying to keep pace. Recorded a month before Bitches Brew was released, these sets were part of a triple bill at New York's legendary Fillmore East that also featured the Steve Miller Band and Neil Young with Crazy Horse. The Davis sets are far from classic rock, however. They're jazz, as modern, abrasive, and pure as the day this fantastic group laid them down.