A Gates Mills beauty dishes up charm. But what about the chow? 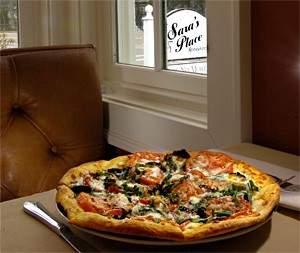 Like a tiny slice of Connecticut on the banks of the Chagrin River, the sleepy burg of Gates Mills exudes historic charm, rife with white clapboard, red brick, and modest New England architecture. Fast food and chain stores have yet to rear their heads here. And you're more likely to spot mastodons grazing on the village green than a panhandler wandering these quiet streets. The upshot is a place that feels almost magical, as far removed from quotidian cares as Kobe beef is from the realm of the Big Mac.

Still, you gotta eat. So if for no other reason than sheer convenience, the nearly one-year-old Sara's Place has made a welcome addition to this idyllic setting.

The place offers up a vibe as cozy as a Colonial tavern, with low ceilings, 100-year-old oak flooring, and oil lamps flickering on the tabletops. Yet just when you start expecting a four-in-hand to go trotting by the big windows, you notice the contemporary dishware, the soft napery, and the golden glow from the recessed lighting. Equally au courant are the complimentary valet parking, the coat check, and the pretty upstairs lounge, complete with granite-topped bar, upholstered seating, and a small fireplace.

There's nothing old-fashioned about the lunch and dinner menus either, thanks to restaurateurs Dave and Mary Gromelski, who also run Willoughby's popular Italian eatery Gavi's. Sara's menu boasts an unmistakably Italian accent, with plenty of pasta, pizza, and antipasti. Those standards are augmented by a handful of non-Italian entrées at dinner, including stuffed cabbage and the crowd-pleasing chicken pot pie. At lunch, an assortment of burgers and sandwiches join the lineup.

Still, a promising menu, a comfy room, and a welcoming vibe can take a would-be diner only so far. What Sara's still needs is a more exacting kitchen, capable of pulling off dishes that are as uniformly pleasing as the setting.

Achieving that seems to be a work in progress. Take a weeknight starter of steamed mussels and clams: Small, withered, and overcooked, the disappointing little shellfish bobbed in a broth so fearsomely spicy that it nearly obliterated any perception of flavor. Worse yet, this actually may have been a good thing, since at least one of the mussels clearly was past its prime.

Also disappointing was a dry, lifeless Kobe beef burger, which was overwhelmed by a run-of-the-mill kaiser roll. A pair of pale, tasteless tomato slices and some slightly wilted romaine weren't enough to transform this patty into palatable.

There were other forgettable dishes too. A three-piece serving of smoked salmon bruschetta, with chopped salmon, capers, tomato, and red onion, was excessively salty. So were the entrée-sized Mediterranean tuna salad and the grilled veggie salad, an otherwise commendable stack-up of neatly diced zucchini, artichoke, peppers, and 'shrooms, with feta crumbles and an alfalfa-sprout topknot.

Yet when it came to the bland pasta Bolognese — a toss of reasonably firm cavatappi (not the promised pantacce toscane, or "little rags" pasta) and a somewhat tinny-tasting tomato sauce with ground beef, pork, and veal — a bit more salt might have helped.

Other dishes did showcase the kitchen, including the juicy "beans and greens," a well-seasoned mélange of buttery cannellini beans, tender escarole, and spicy (but not punishing) Italian sausage in a splash of marinara. Also well executed was the eight-bone rack of lamb, served rare as ordered, with mashed potatoes, green beans, a mushroom demi-glace, and a sweet-and-tangy portion of orange-mint marmalade.

Surprisingly, though, the kitchen's best trick may have been its most humble: the Four Seasons pizza, a moderately thin-crusted, wood-oven-baked cutie, generously topped with mushrooms, kalamata olives, spicy banana peppers, crumbs of prosciutto, and a blend of mozzarella, provolone, and parmesan cheeses. It was a jazzy, tongue-tingling medley of bright, well-balanced flavors.

Other worthy discoveries included the miniature pecan pie with a perfectly light and flaky crust, the hearty cannoli, robust coffee, and a selection of soothing organic teas. A 70-plus bottle wine list, tilted toward the New World, also offered some exotic explorations, including an enchantingly complex Shiraz and Viognier blend from Yalumba's Barossa vineyards. But at $28, the Aussie was one of only six bottles priced below the $30 mark.

All in all, Sara's Place is not without its charms. Weaving them into a spellbinding tapestry should be the next trick up the Gromelskis' sleeves.