With Ekoostik Hookah and the Big Wu. Saturday, July 17, at Scene Pavilion. 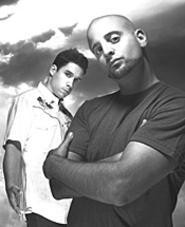 If anything irritates Fred Sargolini, half of the forward-looking hip-hop/electro duo Ming and FS, it's artists who think they have to color inside the lines.

"A lot of them don't realize they're doing it," he believes. "They say they're open-minded, but they're really puritans. It's like they're doing this underground art form, but at the same time, they've taken Britney Spears's rules and all these other rules of pop and just applied [them] differently to another form of music."

Ming and FS can't be accused of committing this sin; they shift gears like a Grand Prix driver. After putting out an album -- 1999's Hell's Kitchen -- that was embraced by the hip-hop intelligentsia, they followed up two years later with The Human Condition, which downplayed rap in favor of house and other electronic noises, completely mystifying a sizable percentage of their constituency. Their latest CD, Back to One, blends hip-hop and house so irresistibly, it should placate fans of both genres.

Ming and FS know a little something about genre-juggling. In concert, the two not only man four turntables simultaneously, but also toss in sounds they generate using actual instruments, rather than the sampled kind. Pulling off this stunt night after night takes careful planning.

"We work on tracks in the studio, but we also work on live stuff so we can figure out who's taking what on, what needs to be changed in the computers, what needs to be exported," FS says. "One of us will go, 'I'm going to play the bass line on this track, so you've got to cut everything out. But I'm going to drop out and then come back and scratch in this one certain part, so the bass line needs to come back in.' We've got to work all that stuff out and have it prerecorded before we can play it live. People just freaked out over it on our last tour. When we came around the turntables and played, people lost their shit, because they didn't expect it."