Ministry calls it quits. But it has one more tour to get through first 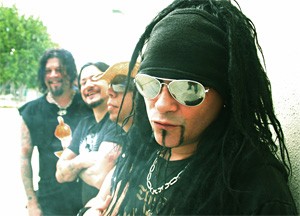 After more than a quarter-century of assaulting eardrums with squalling synths and amp-shredding guitars, Al Jourgensen is pulling the plug on Ministry. He's had enough, he says. And it's not one of those Beatles things, where he'll continue to make Ministry records after he takes the group on one final tour across the continent. This is really The End.

"I have no reason to go past our prime, like all these other Botoxed bands do," says the 50-year-old singer, guitarist, and keyboard player. "It's degrading and deflating when you see all of these bands that had hits in the '90s playing pizza parlors. It's not worth it."

You can't blame the guy for calling it quits. Since Ministry's 1983 debut, With Sympathy, Jourgensen has overhauled the group many times, running through more than two dozen members since its inception. The band started out playing new-wavey synth-pop tunes and ended up an industrial-size powerhouse. Over the years, there have been landmark albums (1992's Psalm 69: The Way to Succeed and the Way to Suck Eggs), duds (all the other records that came out in the '90s), and CDs that seem to have been made just so Jourgensen could slam President Bush (2004's Houses of Molé).

So he's going out — with one last tour, dubbed C U LaTouR, and one last album, Cover Up, a collection of songs made famous by other, more commercially viable artists. Jourgensen says the new CD's tunes were chosen by "how much Jack Daniel's we drank in the studio and if somebody knew a riff. There really wasn't any thought involved."

Cover Up includes songs by the Rolling Stones ("Under My Thumb"), the Doors ("Roadhouse Blues"), and Bob Dylan ("Lay Lady Lay"). It's a curious way to end a proficient and totally original career, one that's launched a thousand industrial-noise imitators (Ministry got there way before Nine Inch Nails crossed over). "I wanted to remind people that Ministry is also a pretty kick-ass rock band," says Jourgensen. "I didn't want to be remembered for just shaking my fist in the air: Bush this, Bush that. I wanted to go out with a decent party record."

Besides, The Last Sucker, which was released in September, is Ministry's real swan song. And like its immediate predecessors, it spends a great deal of time ripping on the Bush Administration. "Dick Cheney, son of Satan," goes the chorus of "The Dick Song." "No Glory" kicks off with a rousing "One thing's for certain/We fucking work for Halliburton." And sing along to "Death and Destruction"'s catchy "Our occupation of other nations/Is bound to have a fuckin' violent effect." You get the picture.

"I didn't set out to do three Bush records," sighs Jourgensen, who, in conversation with music writers, likes to point out how much he hates music writers. "A bunch of idiots kept reelecting him, so I had to keep making them."

As you probably guessed, the guy who makes Ministry's music is often as angry as the music itself — though, to his credit, Jourgensen can also be self-deprecating, shrewd, and kinda funny when he wants to be. But he wasn't always this way. With Sympathy came out right when MTV, Rolling Stone, and other cultural tastemakers were declaring a second British Invasion, with bands like Culture Club, Duran Duran, and Eurythmics snagging tons of airplay. Ministry rode that wave. Thing is, Jourgensen is from Chicago, even though the synth-popping With Sympathy doesn't sound like it.

By 1986's Twitch — which laid the groundwork for more brutal music to come — Jourgensen had left Arista and signed with the more indie-minded Sire Records (home to the Ramones, Talking Heads, and Madonna). Turns out, the Warner Bros.-owned Sire was run by a bunch of "fucking idiots" too.

But Jourgensen didn't seem to mind: He stuck around with Sire for almost 15 years, releasing his best work — The Land of Rape and Honey, The Mind Is a Terrible Thing to Taste, Psalm 69 — on the label. Besides, the mega-corporate Warner Bros. was unknowingly subsidizing the ultra-indie Wax Trax!, home to such industrial giants as Front 242, KMFDM, Meat Beat Manifesto, and various Jourgensen side projects (he's led Revolting Cocks, 1000 Homo DJs, and many other bands over the years). "The money I got from Warner Bros. was able to fund Wax Trax!" he laughs. "Basically, they were funding their competition. I thought it was a pretty good scam."

After Ministry's tour wraps up in Chicago next week, Jourgensen plans to keep busy producing other artists and working on soundtrack scores. And kicking back. He's lived like a rock star for the past 25 years, snorting, shooting, and smoking things only Keith Richards knows about. It's time to take it easy. Sort of.

"I own a record label, I produce a butt-load of other bands, and I'm busier than I've ever been," he says. "Ministry takes up a year and a half of my life: six months touring, another six to eight months in the studio, and four months talking to you knuckleheads in the press." (Thanks, Al, we'll miss you too.)

"I'm too old and cranky for this shit," he concludes. "It was fun when I was in my twenties. Frankly, I'd rather be at home with my dogs than traipsing around the country like a drunken idiot in a tour bus, trying to find a truck stop to crap in."