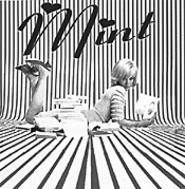 It's pretty telling that Mint dots the "i" in its name with a little heart, on the cover of its eponymous debut. With handclaps, talk of rainbows, and song titles such as "I Still Think the World of You," Mint's winsome pop is radiant enough to deepen tans a shade or two. "All I want is to be true," sings Mint's frontman Tom Fineran on "Stay Friendly With the Noise," a stirring pop sing-along that's pretty and pleading at once -- as are the other six tracks on this disc.

The highlight of it all is the aforementioned "World," a near-perfect blend of lovely, layered vox and buoyant guitar that's a contender for local single of the year. The rest of Mint is nearly as infectious. From the acoustic hush of "That Wine Cooler's Just Not You" to the six-string pyrotechnics of "60 Million Jennifers," this sugar rush is highly recommended. Just don't forget to brush afterward.