With Pinback and Snowforestars. Thursday, March 20, at the Beachland. 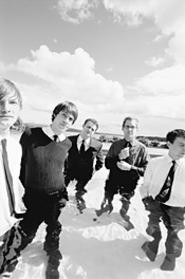 The way critics and record labels bandy about the "emo" designation these days, it wouldn't surprise us to see Toad the Wet Sprocket's inevitable comeback album saddled with the tag. So when we refer to Minus the Bear as emo, we'll do it with one caveat: that anyone who disagrees (and those familiar with emo's latest -- and lamest -- poster boy, Dashboard Confessional, probably will) go to their local indie store and pick up a Cap'n Jazz record. After all, Cap'n Jazz practically invented the emo sound that saturated the Midwest indie-rock scene throughout the late '90s.

Minus the Bear's debut, last year's Highly Refined Pirates, has more studio polish than anything in Cap'n Jazz's catalog does, but most of Dave Knudson's guitar licks could easily be mistaken for the lilting noodles and visceral riffs that Victor Villareal and Davey Von Bohlen spilled out back in the mid-'90s. Even smart-aleck Minus the Bear song titles like "We Are Not a Football Team" and "Damn Bugs Whacked Him, Johnny" read like updates of Cap'n Jazz classics "We Are Scientists!" and "Troubled by Insects." The only thing missing, really, is Tim Kinsella's shrieking hissy-fit delivery and overindulgent spoken-word-style lyrics, which Bear singer Jake Snider replaces with some considerably more restrained crooning and, ahem, drivel for lyrics.

But really, in the face of Kinsella's latest uninspiring Joan of Arc album/tour, a return to those emo roots sounds pretty damn good to us. Most of the material on Pirates explodes with post-hardcore energy -- especially on the breakdowns, when Knudson's stop-and-go riffing combines with Matt Bayle's dizzying keyboard and organ swirls, creating driving walls of emo rock. And no, emo rock is not an oxymoron.