Another Nail in the Remodeled (ROIR) 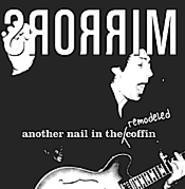 Like most of their contemporaries in Cleveland's underground rock scene of the '70s, the members of Mirrors floated in and out of other bands, couldn't get gigs, and recorded rarely. While the Dead Boys got a major-label deal, Pere Ubu some cult fame, and Rocket From the Tombs and Electric Eels periodic hat tips in the form of various bootlegs, Mirrors' recording road was the rockiest -- strange, since they were the most melodic of all.

Mirrors never got around to laying down an album proper until the very end of the '70s -- maybe. See, things get tricky. Resonance, an '80s noise-rock indie, released the original, vinyl-only version of Another Nail in the Coffin in 1989 -- or so says the ROIR website -- though the record itself says 1991. A week after the album came out, the label went under. Supposedly, boxes of the record still sit in a New Jersey warehouse. Since nailing down the exact recording dates of this stuff is nearly impossible, 1976-'80 is a good guess. ROIR now collects it all for this extremely welcome release.

By the time of these recordings, Mirrors had settled into a groove as a trio of cult-rock foot soldiers. "I'm the One," "Another Nail," and "I Think I'm Falling" sugar-coat punk riffs and drop in screechy wailing bridges, ultimately conjuring some new-wave crest that never reached shore. The band easily leaps from sweetie-pie preening ("If I Swear") to pickled punch ("I Got a Need"). Later sounds ("Halt Amphigory," "And I Saw You") veer into nerd jangle, using Byrds licks in a manner that such later lo-fiers as R.E.M., GBV, and Pavement would embrace. All of it was propelled by Jamie Klimek's nervous, bookworm-as-budding-purse-snatcher cooing.

Mirrors' attempts to take the '75 Cleveland sound from the alleys to the main drag without a noticeable "sellout" is as impressive as any in American new wave. This is some real, forward-thinking pop -- sans the showbiz glitz that might've gotten them signed, but would've relegated them to an asterisk in a Devo biography, however unwarranted.