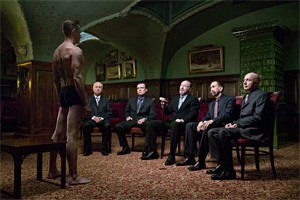 TOP PICK — Eastern Promises (Universal)
Director David Cronenberg and The Lord of the Rings' Viggo Mortensen follow up 2005's brilliant A History of Violence with this blood-splattered crime story (now out on DVD) about a mob driver whose loyalty is tested after he hooks up with a nosy hospital worker (played by Naomi Watts). Mortensen's naked steam-room skirmish is one of the year's top set pieces.

DVD — Chappelle's Show: The Series Collection (Comedy Central)
This six-disc box features all 28 episodes from Chappelle's too-brief three seasons. But what a run: No other TV show has ever delivered sharper comedy. Bonus items include deleted scenes, previously unseen sketches, and commentary by Chappelle. Best of all, the catchphrase-launching Rick James skit gains a few extra minutes. It's even more Rick James, bitch!

VIDEO GAME — BlackSite: Area 51 (Midway)
Partway through this first-person shooter (for the Xbox 360), generic, gun-toting bad guys give way to an even more hostile menace: bug-like aliens from outer space. Action takes place in small-town America, which gamers can level with an arsenal of high-tech weapons and vehicles. Coolest feature: One-Button Squad Command, which lets players send lower-ranked soldiers to do their dangerous dirty work for them.

VIDEO GAME — Need for Speed ProStreet (EA)
This venerable series takes it to the streets once again in a fast-moving game for pretty much every console (including the Xbox 360, Wii, and PSP). Gamers custom-build rides and race all over the world (quite literally: The cool online mode lets players set up their own contests). Besides, unlike other ultra-realistic race games, a little collision — with other cars, walls, etc. — doesn't necessarily mean an immediate trip to the tune-up shop.

The Steely Dan smartass' three studio albums (The Nightfly, Kamakiriad, and Morph the Cat) anchor this seven-disc box, which adds live cuts, interviews, and videos to the original records. There's also a bonus CD filled with outtakes and B-sides. Be sure to check out the terrific surround-sound mixes, which add new depth and clarity to albums that already rank among the most fussed-over in pop history.

COURTESY FLUSH, PLEASE — Featuring . . . Eazy-E (Capitol/Priority)
Eazy-E is responsible for bringing together N.W.A, one of hip-hop's most influential crews. But as a solo artist, the nasally voiced rapper (who died of AIDS in 1995) never matched the skill, dexterity, or, frankly, the talent of the group's stars. This 16-track CD compiles collaborations (with Bone Thugs-N-Harmony, among others) and a few hard-to-find cuts — "Trust No Bitch," "Fat Girl" — that are no more inspired than their titles.