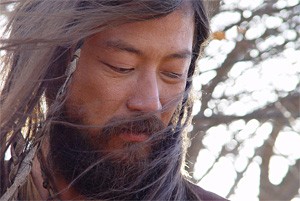 You want a history lesson? Take a class.

"Do not scorn the weak cub; he may become the brutal tiger," Mongol's opening title card reads, and Russian director Sergei Bodrov shrewdly casts this reverent retelling of Genghis Khan: The Early Years not as the rise of an emperor, but as a classic underdog tale. Using mostly real extras, stunt work, and staggering locations, Bodrov recounts the 13th-century conqueror's path from childhood enslavement to tender lover, doting dad, all-around square dealer, and — oh yeah — builder of the Mongol Empire.

As storytelling, aside from its flashback structure, the movie's as straight as the arrows that fly in close-up — a CGI trick that, like most of the movie's effects, is more effective for being seldom used. It's powered by a quietly commanding performance by Tadanobu Asano, and by the forceful evocation of its physical details: horses traversing a field of boulders, the heft of its bulky costumes. Last year's Academy Award nominee for Best Foreign Film, Mongol is purportedly the first in a multi-film saga about the wrath of Khan; as such, it's probably the last thing you'd expect — great fun.