One man's quest for peace and quiet in a noisy world. 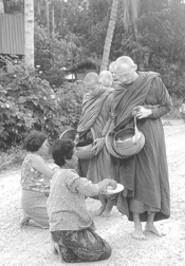 Somewhere between his boyhood in Kansas and life in New York City, author William Claassen realized he had lost something: silence. He knew it was still out there, so he set out to find it, on monastic retreats throughout the world. He relates the results in his book, Alone in Community: Journeys Into Monastic Life Around the World, from which he will be reading Saturday at Mac's Backs Paperbacks in Cleveland Heights.

"I wanted to convey the power of silence in my life," Claassen says. "In a culture where oftentimes silence isn't given credit for its power, I wanted to go deeper into that, and I wanted to meet people within other traditions to gain some of their experiences."

Visiting monasteries in 11 countries from France to India, Claassen stayed with monks of a variety of faiths. Many times, simply not understanding the language required him to spend time without speaking.

"Relating to a community through silence is a very powerful thing," Claassen says. "In a monastic community, things are very slowed down, so that gave me an opportunity to take a deep breath and be in the moment."

Depending on the monastery, being in the moment was easier at some times than at others. Apart from the silence, there were the rituals and music, some of which Claassen didn't find conducive to introspection. Other times the monks themselves were not so welcoming to strangers -- none of which he tries to hide in his book.

"There were some situations where it was more difficult to relax," he admits. "There were instances when I stumbled, and I couldn't get beyond my own issues or beyond personalities."

Overall, Claassen found the experiences "pretty powerful" and would recommend a stay at any of the monasteries he visited. "What I was really trying to convey in my book was the surroundings -- the fact that there are these islands of quiet that are available to people. I believe they're closer to us than a lot of people think."