A reporter's hunt for a child-killer tests the power of the press. 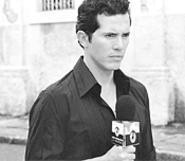 Crónicas' biggest claim to fame ought to be that it was Ecuador's submission for the Best Foreign Language Film Oscar, but what most people tend to notice is that it stars John Leguizamo. Mixed messages ensue: "Oscar submission" makes one think of quality, while John Leguizamo's name inspires visions of horror -- House of Buggin', The Pest, Executive Decision, To Wong Foo . . . The man's "comedic" side seems inspired by the manic styles of Jim Carrey and Robin Williams, only twice as loud and a thousand times less funny. What people forget is that he began his career on the stage. There is acting talent in there somewhere, but it takes a rare director to bring it out. Congratulations, then, Sebastián Cordero: You have achieved what many could not.

Leguizamo's best performance prior to this was as a hyperactive crystal-meth addict in Jonas Åkerlund's Spun; embracing the annoying qualities of previous roles and subverting them seems to be the way to go. Maybe acting in Spanish helps too. Crónicas sees him cast as arrogant Manolo Bonilla, a TV journalist from Miami who regularly appears on a popular newsmagazine called One Hour With the Truth (which is hosted by an amusing and unexpected Alfred Molina). He's slick, cocky, willing to manipulate events for a good shot, and during conversations occasionally lapses into English, even though no one else onscreen appears to speak it.

Like almost everyone else in the media and law enforcement, he's fascinated with the case of a child-killer on the loose in Ecuador, a man dubbed the Monster for obvious reasons. At the funeral of the most recent victims, however, Manolo witnesses another monstrous act -- the twin brother of one of the dead children is killed by a careless driver named Vinicio Cepeda (Damián Alcázar), and the father of the boy, Don Lucho (Henry Layana), drags Cepeda out of the car, beats him up, douses him with gasoline, sets him on fire, and then prepares to get really angry. Seeing that Cepeda has a pregnant wife and a young stepson, Manolo intervenes to keep Cepeda from being murdered outright. The outcome is jail for both Lucho and Cepeda, and a great story for Manolo.

There's the possibility of an even greater story waiting in the wings, though. Cepeda, a traveling Bible salesman, claims that during one of his trips, he picked up the Monster hitchhiking, and the man confessed some of his crimes to him, including the murder of a little girl whom the police have not yet found. If Manolo will agree to do a feature on Cepeda's unfair conviction, he agrees to reveal everything he knows about the killer. Manolo, of course, makes the fairly obvious assumption that, to know so much, Cepeda must be the killer. Now, if he can just induce the man to confess on camera . . .

You might expect a film similar to The Life of David Gale to ensue. Hey, he said he's innocent, but here's the twist: He's guilty! No, wait, counter-twist: He's innocent! Oh, but the movie's not over yet, so he must be guilty after all! In fact, Cepeda's guilt or innocence isn't really the main point, though there is some suspense there. Writer-director Cordero (Rodents) is more interested in the role -- and the responsibility -- of the media in society. Is it moral to offer the promise of a puff piece, if it might lead to the capture of a real killer? What duty does the press have to turn sources over to the police? If newscasters become celebrities, do they merit special treatment, and how does that affect their work? Cordero doesn't offer solid answers, but he'll get you thinking about them.

Questions like these have been offered in less subtle American films like Natural Born Killers, but unlike in that movie, the characters of Crónicas aren't ciphers. Manolo, though inclined to do good, is no great hero, and neither is his seemingly more virtuous colleague, Marisa (Leonor Watling). For most actors, this would represent a welcome chance to stretch -- for Leguizamo, it's a quantum leap in quality.

Along the way, we learn some useful advice: If you're ever in prison and fear for your life, cover yourself in human feces, and no one will come near you. Safe to say this works in civilian life too, but try it only if you must.