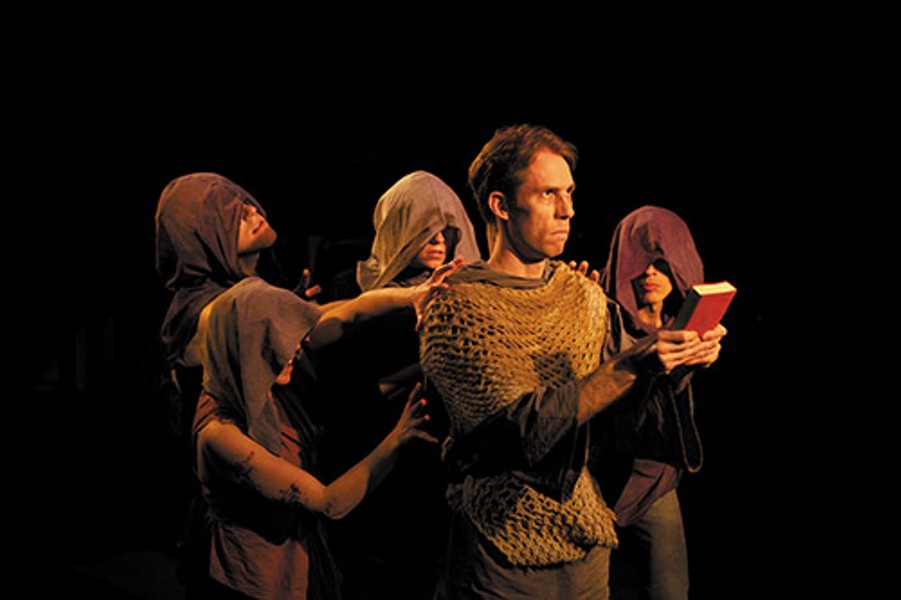 First, let's clear up a possible misunderstanding about Monster Play, the devised performance now on the boards at Cleveland Public Theatre.

Read the title and you might think this production could be part of a scary Halloween evening, pairing up nicely with the cadaver crawl at your local chug-n-belch beer shack.

Well, think again. The CPT performance, directed by Jeremy Paul (founder and artistic director of Theater Ninjas), features some captivating movement, lots of disconnected words, and spooky lighting effects. But instead of simple-minded blood, gore, and horror, it is all in an effort to address the complex issues surrounding fear, torment, and salvation.

If that sounds like potentially heavy slogging, it frequently is. While Paul's previous excursions into devised theater have resulted in compelling experiences, Monster Play often feels self-indulgent and pretentious, when it isn't simply indecipherable.

The evening, created and written by Paul and his five-person cast, is loosely structured around The Temptation of Saint Anthony by Gustav Flaubert. According to legend, back in the third century Anthony was a monastic hermit, living in the desert and trying to withstand multitudinous temptations and the perplexities of life. Well, join the crowd, Tony.

Indeed, those are wrenching yet familiar themes that writers of all stripes have grappled with over the eons. But the primary problem with this production is embedded in the initial staging concept: Instead of enlisting the audience as partners in exploration, as Paul did a year ago in the wonderful devised theater experience The Excavation, the patrons in this case are simply forced to endure a litany of philosophical bead stringing.

Thus, we have a torrent of statements such as: "I revel in coincidence," "I am the death of stars," and "You are alive because you learned to fear." Most of these thoughts — any one of which could individually serve as a platform for a play — are spewed without the helpful structures of character or plot.As a result, it can all sound agonizingly sophomoric and random.

Still, in small bursts, this CPT production seems to teeter on the brink of finding a fresh and sometimes humorous take on the issues. Modern "monsters" are inserted, ranging from an overprotective mom's terrors to imagined sci-fi creatures.

And the cast can be quite winning at times. Stuart Hoffman gives Saint Anthony a properly tormented affect and visage, and the other cast members — Ray Caspio, Val Kozlenko, Jenni Messner, and Lauren B. Smith — throw themselves bodily and inventively into the fray.

Their quasi-dance moves as they run, collapse, or jump in fright are arresting. And scenic designer Andrew Kaletta's bat-wing folds of fabric, suspended above the stage, combine with Benjamin Gantose's moody lighting to create a properly threatening stage-scape.

Unfortunately, the words assembled by Paul and his players run around in circles more often than the actors themselves. This causes multiple collisions of ideas that frustrate more than edify or intrigue.

The play's collaborators seem to sense the hollowness of their effort when, later on, they poke fun at philosophizing. But by then it's too late, the curtain has fallen, and the parched audience staggers out into the night searching for a tall, cool Zombie on the rocks.

Meantime, CPT is staging Royal Ann's Preserve next door to the Storefront Studio theater where Monster Play is running. This interesting performance-art piece is co-created by the Hargates: mother Joan, who designed the installation, and daughter Faye, who performs and directs.

Upon entering, audiences are immersed in a pink, plastic exploration of cleanliness, sweetness, and the veneer of femininity. The space abounds with candy, old family photos, and an opportunity to interact with both the objects and the performers, who also include Carly Garinger and Darius Stubbs. Royal Ann's Preserve is free with the purchase of a ticket to Monster Play, and is open before and after the play.