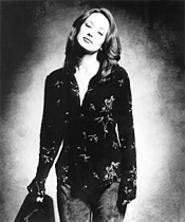 Okay, so Moorer, who just released her third album, Miss Fortune, may not be the sunniest singer-songwriter to come down the pike. But the sadness with which she imbues her songs -- she prefers to think of them as "realistic" -- suits her rich, dusky voice perfectly. So at least there's some solace to be had amid the melancholy tales she so often spins.

"If this record has a theme, I think it's the inevitability of life. Take 'Ruby Jewel Was Here,' for instance. ["Ruby" is a raucous barroom tale of a young prostitute who murders her first client.] That song, to me, is basically about this horrible stuff that is happening and then, you know, nobody cares. Life goes on, the world keeps turning, even when you think it shouldn't."

Moorer has seen unspeakable tragedy in her own life, of course. When she was 13 and her older sister, singer Shelby Lynne, was 17, their father came home and shot their mother, from whom he was estranged, then turned the gun on himself. Moorer has addressed the topic on two songs, "Is Heaven Good Enough for You," from her debut release, Alabama Song, and "Cold Cold Earth," a hidden track on her sophomore set, The Hardest Part.

Amazingly, Moorer not only survived the situation, but ultimately thrived. She finished high school at age 16 and at 20 graduated from the University of Southern Alabama with a degree in public relations. She moved to Nashville immediately, but without a specific plan for her future.

Eventually she began singing backup vocals for "Sissy," as she calls her elder sibling. Then Moorer began writing songs and met another songwriter, Doyle "Butch" Primm, whom she married in 1995. The pair fell in with a loose confederation of Nashville songwriters that included Lonesome Bob, who cut the Moorer/Primm song "Call My Name" on his 1997 debut album, Things Fall Apart. A year later, Moorer was signed to MCA Nashville and released Alabama Song. In an extraordinary move, company president Tony Brown allowed her to record her own songs, most of them written with Primm.

One of the tracks from Alabama Song was used in the Robert Redford film The Horse Whisperer, and Moorer even made a cameo appearance in the movie. The song wound up with an Academy Award nomination -- the first by a Nashville performer since Dolly Parton was honored for 9 to 5. Moorer sang the song on the awards telecast, which must have been nerve-racking at the time, though she takes the experience in stride now.

"I just got up and did my job," she says. "It's just a big ol' show, like any other big ol' show. It was very cool to get an Oscar nomination, 'specially at -- what was I? -- 26 years old. The thing about it is, I think it kind of went over everybody's heads in this town. That's not the world that they live in. People around here live in the little country-radio world, and if you don't operate in that world, then you're nothing."

If Nashville couldn't be moved by an Academy Award nomination, it was even less impressed by Moorer's 2000 album, The Hardest Part, a song cycle about the dissolution of a relationship. Despite critical raves, she still floundered commercially.

Miss Fortune finds Moorer with a new label, Universal South, though it's still part of the Universal family that owns MCA Nashville. The intent of the new label seems to be more progressive than Nashville usually allows, and it's seemingly in good hands with former MCA chief Brown at the helm.

"You know, I would have been in serious bad shape, had I stayed with MCA Nashville without Tony Brown," Moorer says. "I doubt they would have even wanted me. I wasn't ever let go, though. I just went from one label to another." As for Brown, she says, "He has always let me do what I wanted to do -- never tried to make me fit into that little round hole that is country music these days, or so-called country music."

That much is obvious from one spin of Miss Fortune. The songs are country at their roots, but take on a more soul-and-pop flavor, thanks to R.S. Field's production -- particularly the Beatlesque strings and slide guitar on the lead single, "Cold in California." Other songs, such as "Hey Jezebel" and "Going Down," rock out, showing a new facet of Moorer's musical personality.

Some who have heard the bittersweet "Cold in California" have been asking Moorer whether the song was written for her sister, a notion that seems to vex her in the extreme. Reports have relations between the two as distant. And Lynne, after all, does live in California.

"Well, so do a lot of other people," Moorer shoots back. "I've just heard that so many times. And I'm like 'Oh, OK . . . well, no.' Contrary to popular belief, my sister and I are very close and get along very well. We just don't talk about each other in the press."

For now, Moorer is content to prep for her upcoming tour and to continue enjoying life in Nashville, where she may not be a big star, but has definitely found her niche.

"There are so many talented people here," she says. "That's one of the great things about living in this city. It can be very inspiring. You can sit around with some amazing people in somebody's living room, playing guitars. But here's my advice: If you're gonna play, you better be sure to do one of your best songs."