Lovedrug returns to the indies. 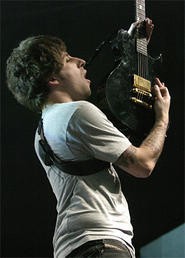 After a stint with Columbia Records, Canton's Lovedrug has returned to California's Militia Group for its upcoming second album. Everything Starts Where It Ends is slated for release March 6 on the emo indie label, whose roster includes Copeland and Cleveland's Brandtson.

"It wasn't any sort of a negative situation where we got screwed by [Columbia]," says frontman Michael Shepard. "A lot of people that were there when we started working on the record were not there by the time the record was going to be coming out. Our management set up a meeting, and they let us take our record and go. We wanted to get the album into certain stores, and onto the radio, and the Militia Group was the best option."

Lovedrug's full-length debut, 2004's Pretend You're Alive, moved 25,000 copies on the Militia Group, which is distributed through Sony. Months later, Sony upstreamed the band to its Columbia label, where the disc moved another 10,000 copies.

Lovedrug's new disc straddles emo and rock-phase Radiohead. It's produced by Tim Patalan, best known for his work with alt-rockers Sponge. The group recorded the album over the past year, between its first headlining tours and some prime opening slots. (Panic! at the Disco frontman Brendan Urie invited the band to open a series of dates.)

"The guys in Lovedrug are incredible artists and wonderful people," says Militia co-owner Rory Felton. "And we are more than enthusiastic about working with one of the greatest bands in the world."

In February, Lovedrug will visit Japan to promote the new disc. They'll support A Plain White T's tour from March through May and remain on the road all year. Their next local show is March 2 at the Lime Spider. If you just can't wait to see them, visit Clevescene.com/blogs for a link to the band's new video, "Ghost by Your Side," which was shot in New York City last fall.

· The former members of Cyde, one of the city's top-drawing bands from the alt-rock era, have gone on to form the rowdier God Guns and Glory. Richard Patrick of Filter and Army of Anyone has told Scene he's seeking a producer for the band. A Cyde reunion show slated for this weekend has been canceled, but GGG will play at the Crossroads (153 East Cuyahoga Falls Avenue, Cuyahoga Falls) on Saturday, January 20.

· Hate Dies Hard is working on the follow-up to last year's Neverending Sundown, planning an EP with an acoustic cut and a cover to be determined. Drummer Sean Barringer will sing on the disc. Bassist Scott Bivens, meanwhile, has left the band.