View From Everest signs with a Universal imprint. 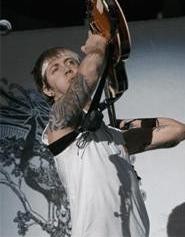 Cleveland melodic rock band View From Everest has signed a three-album deal with Rust Records, the local subsidiary of Universal Records. Rust has just issued View's Contagious LP and has another on the books for this year.

The band is already recording a new album with producer Bryan Patrick (formerly Cooper's bandmate in Youngstown's Sinomatic) and has visited L.A. to work with mixer Eric Sarafin (Audioslave, Lifehouse). Cooper says the disc is slated for a single release in June.

· Cleveland '80s power-pop favorites Beau Coup will reunite Saturday, May 13, to commemorate the 20th anniversary of its anthem "Born and Raised on Rock and Roll." The lineup will include special guests in addition to the band's original members. The show will also feature the release of a new CD, Beau Coup: Then and Now, made up of hits, rare cuts, new material, and previously unreleased tracks. Contemporary band Genuine Son will reunite for the show. Visit www.beaucoupband.com for more information.

· For their fifth release, Cleveland post-Tool rockers Audiblethread will be recording with Cole Martinez (Years of Fire, Shenoah). The band plans to release the as-yet-untitled CD/DVD in September. Audiblethread headlines the Cleveland Music Festival this weekend, playing Peabody's (2083 East 21st Street) Saturday, May 13.

· Ventana, the Mushroomhead electro-rock side project, has finished drum tracks for its full-length debut. The band headlines the Cleveland Music Festival this weekend.

· Morris Report: After playing a series of South American shows with Quiet Riot in April, Cleveland guitarist Billy Morris will rejoin the band in July at Germany's Bang Your Head festival, which draws upward of 80,000 fans.

· Amps II Eleven, Scene readers' favorite rock band of 2005, has taken another hit to its lineup. After adding drummer Ryan Harkins (ex-Killed in Action, the Stare), the band has split with guitarist Nick Summa, citing creative differences. For a replacement, Amps is looking for "a total asshole . . . into the Stooges, MC5, and obscure garagey '70s boogie rock and '77-'83 California punk and hardcore [who] believes in Bigfoot and doesn't have a suspended driver's license."

Guitarist Aaron Dowell says that Amps have "a good chunk" of their next album written and are aiming for a September release. "It sounds pretty much the same [as 2004's self-titled disc]," he says. "It's a little faster, if anything. We sound like our favorite bands."